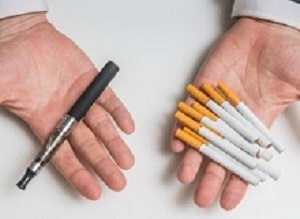 'Cigarette' might appear in the term 'e-cigarette' but that is as far as their similarities extend, reports a new Northwestern Medicine study. Assuming e-cigarettes are equal to cigarettes could lead to misguided research and policy initiatives.

"Comparing cigarettes to e-cigarettes can give us a false sense of what dangers exist because it misses the gap in understanding how people use them and how they can make people dependent," said first author Dr Matthew Olonoff, a postgraduate student at Northwestern University Feinberg School of Medicine.

"Before we start making policy changes, such as controlling nicotine or flavour options in e-cigarettes, we need to better understand what role these unique characteristics have."

The commentary distills articles and published studies that compare e-cigarettes to cigarettes and supports the importance of investigating e-cigarettes as a unique nicotine delivery system. It was published less than a month after the US Food and Drug Administration declared youth vaping an epidemic.

"There are enough key differences between cigarettes and these products, especially newer-generation devices, to show that they are not interchangeable nicotine delivery systems," Olonoff said.

"Teens could potentially be getting addicted to something dangerous and harmful to their health," Olonoff said. "The only way we'll know if this is true is to study e-cigarettes as if they're their own unique device."

"From a research perspective, when we call it a 'cigarette', we know how many puffs are typically in a cigarette, how people use it, the amount of nicotine in it," Olonoff said. "Even though it has the word 'cigarette' in it, e-cigarettes are not the same thing."

To help alleviate this inconsistency, the National Institute on Drug Abuse in March 2018 introduced a standardised research-specific e-cigarette for researchers to purchase. The device allows every researcher to study the same e-cigarette so that the chemical components (nicotine, formaldehyde) are consistent, as is the number of puffs it takes to finish the e-cigarette. Olonoff's commentary encourages researchers to use these for consistency across all research.

E-cigarettes have been commercially available since the mid-2000s, Olonoff said. The technology has been advancing rapidly, which makes it nearly impossible to set up-to-date policy initiatives.

When e-cigarettes were introduced, marketing campaigns suggested they could be used to curb cigarette use. But years later, this claim is still unsubstantiated, Olonoff said.

The relative ease with which teens can use e-cigarettes – such as Juul selling a USB drive-like e-cigarette – might be enticing youths to think the devices are safe, Olonoff said.

"We've done so much to convince our youth that cigarettes and smoking are bad, and overall, it's been a relatively successful campaign when you look at how much smoking has decreased and continued to decrease," Olonoff said. "If teens use the device and they see it differently than the rest of the nicotine products, the researchers should adopt a different philosophical belief, too."