Study finds that 'ecstasy' could help with PTSD treatment 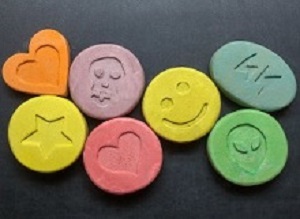 The recreational drug known as ecstasy or molly may help people regain trust in others after being betrayed, suggests results of a controlled laboratory study of healthy men given a pure form of the substance. The drug is currently being assessed for its potential as a supplemental treatment for post-traumatic stress disorder.

Male participants were randomly assigned to receive MDMA or a placebo and then played a game in which the participant and a second player could either work together or against each other. Those in the MDMA group were more likely to choose to cooperate with an opponent who had betrayed them but otherwise proved to be trustworthy.

This behavioural shift was not observed during interactions with untrustworthy opponents, indicating the effect of MDMA is sensitive to the other player's behaviour. Finally, the researchers report altered activity in brain regions involved in the processing of social information.

Abstract
Social decision-making is fundamental for successful functioning, and can be affected in psychiatric illness and by serotoninergic modulation. The Prisoner's Dilemma (PD) is the archetypal paradigm to model cooperation and trust. However, the effect of serotonergic enhancement is poorly characterised, and its influence on the effect of variations in opponent behaviour unknown. To address this, we conducted a study investigating how the serotonergic enhancer MDMA modulates behaviour and its neural correlates during an iterated PD with both trustworthy and untrustworthy opponents.
We administered 100mg MDMA or placebo to 20 male participants in a double-blind, placebo-controlled, crossover study. While being scanned, participants played repeated rounds with opponents who differed in levels of cooperation. On each round participants chose to compete or cooperate and were asked to rate their trust in the other player.
Cooperation with trustworthy, but not untrustworthy, opponents was enhanced following MDMA but not placebo (respectively: OR=2.01 95% CI 1.42–2.84, p<0.001; OR=1.37 95% CI 0.78–2.30 n.s.). Specifically, MDMA enhanced recovery from, but not the impact of, breaches in cooperation. During trial outcome, MDMA increased activation of four clusters incorporating precentral and supramarginal gyri, superior temporal cortex, central operculum/posterior insula, and supplementary motor area. There was a treatment-by-opponent interaction in right anterior insula and dorsal caudate. Trust ratings did not change across treatment sessions.
MDMA increased cooperative behaviour when playing trustworthy opponents. Underlying this was a change in brain activity of regions linked to social cognition. Our findings highlight the context-specific nature of MDMA's effect on social decision-making.
Significance statement
We provide a detailed analysis of the effect of MDMA on cooperative behaviour during interpersonal interactions, as well as the neural correlates underlying these effects. We find that following administration of MDMA, participants behave more cooperatively, but only when interacting with trustworthy partners. While breaches of trustworthy behaviour have a similar impact following administration of MDMA compared to placebo, MDMA facilitates a greater recovery from these breaches of trust. Underlying this altered behaviour are changes in brain activity during the viewing of opponents' behaviour in regions whose involvement in social processing is well established. This work provides new insights into the impact of MDMA on social interactions, emphasising the important role of the behaviour of others towards us.