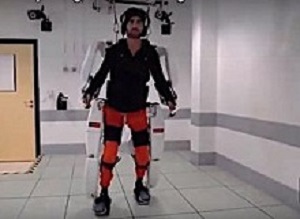 A French quadriplegic man has walked again thanks to an artificial intelligence (AI) breakthrough. The Daily Telegraph reports that the man, who has been paralysed for four years after falling 50 feet from a nightclub roof, was strapped into an exoskeleton an driven by a computer able to read his mind.

Named only as Thibault, the 30-year-old optician successfully walked 10 metres in one go and performed a series of complex arm movements using the futuristic machine.

The report says while powered exoskeletons have been a staple of Hollywood sci-fi for decades, appearing in movies such as Ironman franchise, this is the first real-world example of one being used to help such a grievously injured patient.

Scientists behind the project at the Grenoble University Hospital, say it promises to significantly boost the autonomy and quality of life for the 20 per cent of people with traumatic spinal cord injuries who end up quadriplegic. However, they say major improvements are still needed before the technology can be widely used.

The study took place over 24 months.

With a sliding ceiling harness for safety and to help with balance, the patient walked up and down a laboratory at the University of Grenoble. “I felt like I was the first man on the Moon,” he is quoted in the report as saying.

Until now, much of the research into improving the mobility of paralysed people has focussed on electrical stimulation of muscles, using machine-brain interfaces. An exosuit takes a radically different approach, however, bypassing the body completely.

During the walking trials, Thibault, who spent two years recovering in hospital after his fall, was able to activate the machine using his brain seven out of ten times – 16 months after the sensors were implanted, he was also able to complete eight-dimensional tasks with his hands and arms with a similar success rate.

The report says three further patients have been recruited onto the trial, and the next goal of the researchers is to solve the problem of walking and balancing autonomously without using the ceiling suspension system.

Abstract
Background: Approximately 20% of traumatic cervical spinal cord injuries result in tetraplegia. Neuroprosthetics are being developed to manage this condition and thus improve the lives of patients. We aimed to test the feasibility of a semi-invasive technique that uses brain signals to drive an exoskeleton.
Methods: We recruited two participants at Clinatec research centre, associated with Grenoble University Hospital, Grenoble, France, into our ongoing clinical trial. Inclusion criteria were age 18–45 years, stability of neurological deficits, a need for additional mobility expressed by the patient, ambulatory or hospitalised monitoring, registration in the French social security system, and signed informed consent. The exclusion criteria were previous brain surgery, anticoagulant treatments, neuropsychological sequelae, depression, substance dependence or misuse, and contraindications to magnetoencephalography (MEG), EEG, or MRI. One participant was excluded because of a technical problem with the implants. The remaining participant was a 28-year-old man, who had tetraplegia following a C4–C5 spinal cord injury. Two bilateral wireless epidural recorders, each with 64 electrodes, were implanted over the upper limb sensorimotor areas of the brain. Epidural electrocorticographic (ECoG) signals were processed online by an adaptive decoding algorithm to send commands to effectors (virtual avatar or exoskeleton). Throughout the 24 months of the study, the patient did various mental tasks to progressively increase the number of degrees of freedom.
Findings: Between June 12, 2017, and July 21, 2019, the patient cortically controlled a programme that simulated walking and made bimanual, multi-joint, upper-limb movements with eight degrees of freedom during various reach-and-touch tasks and wrist rotations, using a virtual avatar at home (64·0% [SD 5·1] success) or an exoskeleton in the laboratory (70·9% [11·6] success). Compared with microelectrodes, epidural ECoG is semi-invasive and has similar efficiency. The decoding models were reusable for up to approximately 7 weeks without recalibration.
Interpretation: These results showed long-term (24-month) activation of a four-limb neuroprosthetic exoskeleton by a complete brain–machine interface system using continuous, online epidural ECoG to decode brain activity in a tetraplegic patient. Up to eight degrees of freedom could be simultaneously controlled using a unique model, which was reusable without recalibration for up to about 7 weeks.
Funding: French Atomic Energy Commission, French Ministry of Health, Edmond J Safra Philanthropic Foundation, Fondation Motrice, Fondation Nanosciences, Institut Carnot, Fonds de Dotation Clinatec.

US man becomes a chimera after bone marrow transplant