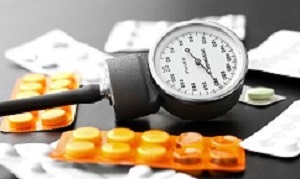 Blood pressure medication may confer a larger benefit if taken at night, rather than in the morning. A “robust” Spanish study of more than 19,000 patients found that taking the medication so that it works overnight cuts the risk of heart-related death and disease nearly in half.

"The same medication ingested at different times of the day actually has different pharmacological properties, behaving like totally different medications," said the study's lead author, Ramón Hermida, director of the Bio-engineering and Chrono-biology Labs at the University of Vigo in Spain.

NBC News reports Hermida and his research team randomly selected half of the study participants to take their blood pressure pills upon waking up in the morning. The other half made the medication part of their bedtime routine. The team then tracked the patients for six years, periodically monitoring their blood pressure levels continuously in 48-hour blocks.

The differences in outcomes were striking: Compared with the group who took their pills in the morning, the night-timers had a more than 40% lower risk of experiencing a heart attack, heart failure, stroke or needing procedures to open clogged coronary arteries. What's more, their risk of dying from heart problems during the study period was cut by 66%. By taking your blood pressure medications before going to bed, you're preventing high blood pressure during sleep, which is a significant risk factor for cardiovascular disease, Hermida is quoted in the report as saying.

Normally, a person experiences "nocturnal dipping" while asleep at night: Blood pressure "dips" by about 10% to 20%. But that doesn't happen in some people, and others may even experience an increase in blood pressure during sleep, said Dr Luke Laffin, a preventive cardiologist at the Cleveland Clinic who was not involved in the research. "It makes sense that if we give blood pressure medicines at night, we may catch some of those people who have the non-dipping patterns, or elevated blood pressures at night," said Laffin, "and protect them from more cardiovascular disease."

The report says previous studies had hinted that better blood pressure control at night might offer a benefit. "This was the piece that was missing," Dr Renato Lopes, a professor of medicine at Duke University School of Medicine, said. "For the first time in a very large, randomised fashion, this study really gave us impressive results," said Lopes, who was not involved in the research.

And there are other caveats, the report says. The new research had participants take all of their blood pressure medications at once, either at night or in the morning, rather some in the morning or some at night. But some cardiologists say many patients may need a more tailored approach. "For most people, a combination of a couple medicines in the morning and a couple in the evening means you're going to do better, eliminate side effects and generally have better control of your blood pressure over 24 hours," Laffin said. And people may not want to take certain kinds of blood pressure medications at night, such as diuretics, because they increase urination.

The report says the study included only white participants, so it's unclear whether the apparent benefits would be as effective for African Americans, who have consistently higher uncontrolled blood pressure and heart disease death rates. The findings also may not apply to people who are awake all night, such as shift workers.

Meanwhile, simply making sure to take your blood pressure medications overall has shown to reduce the risk of heart attack and stroke significantly. Anyone with a measurement over 130/80 mmHg is considered to have high blood pressure, according to guidelines from the American Heart Association and the American College of Cardiology.

Commenting on the research, Professor Paul Leeson, professor of cardiovascular medicine, at the University of Oxford, said in a report in The Daily Telegraph: “This study has the potential to transform how we prescribe blood pressure medication“The findings are likely to be relevant to most people who take tablets for high blood pressure.”

Dr Richard Francis, head of research, Stroke Association added: “We’re pleased to see this research, which could potentially change the way we prevent strokes in the future. This is a robust study that shows that people who take their blood pressure medication at night have better blood pressure control and have reduced risk of a cardiovascular event such as a stroke or heart attack.

“Hopefully we can see studies like this recreated in the UK and combined with existing evidence, this could lead to a review of current guidelines on treating high blood pressure.”

Vanessa Smith, from the British Heart Foundation, said in a BBC News report: "Although this study supports previous findings in this area, further research amongst other ethnic groups and people who work shift patterns would be needed, to truly prove if taking blood pressure medication at night is more beneficial for cardiovascular health.

"If you're currently taking blood pressure medication, it's important to check with your GP or pharmacist before changing the time you take it. There may be specific reasons why your doctor has prescribed medication in the morning or night."