A better way to treat prolonged epileptic seizures in children 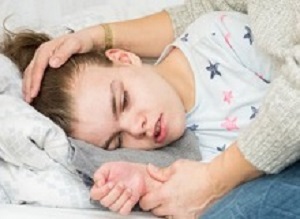 A New Zealand-Australian study has delivered "robust" evidence for emergency medicine doctors to manage children with prolonged seizures without reverting to intubation and intensive care.

The study – which will change management of this condition internationally – was led by Professor Stuart Dalziel from the faculty of medical and health sciences at the University of Auckland and Starship Children's Hospital, and the senior author was Professor Franz Babl at Melbourne's Murdoch Children's Research Institute.

In severe seizures, the first line of treatment (benzodiazepines) only stops the seizures in 40% to 60% of patients. Before this study, the second line treatment was the anti-convulsant drug phenytoin, but until now this practice had never been scrutinised in a robust major randomised controlled trial. Also, phenytoin was known to have a number of serious complications.

In this study, funded by the Health Research Council of New Zealand, researchers compared phenytoin with newer anti-convulsant levetiracetam for the second line treatment of seizures. Levetiracetam is used routinely as a daily medication to prevent seizures, but has not been properly tested against phenytoin for treatment of severe prolonged seizures.

The research, conducted by the PREDICT research network in 13 emergency departments at hospitals in Aotearoa New Zealand and Australia, involved 233 child patients aged between three months and 16 years.

The researchers found that when given individually, the drugs are as good as each other: both had a moderate success rate (50%-60%) at stopping a prolonged seizure.

But strikingly, treatment with one drug and then the other increased the success rate of stopping a seizure to approximately 75%.

Previously, children who continued seizing after phenytoin then needed to be intubated, sedated and placed on a ventilator in intensive care. By giving these two medications one after the other, researchers have potentially halved the number of children ventilated and sent to intensive care.

"By controlling seizures in the emergency department we will increase the chance of these children recovering more quickly and returning back to their normal lives," he says. "This research has already changed practice and led to new guidelines in New Zealand and Australia."

"This study is going to profoundly improve treatment for children who are critically ill with epilepsy around the world," says Babl.

Abstract
Background: Phenytoin is the current standard of care for second-line treatment of paediatric convulsive status epilepticus after failure of first-line benzodiazepines, but is only effective in 60% of cases and is associated with considerable adverse effects. A newer anticonvulsant, levetiracetam, can be given more quickly, is potentially more efficacious, and has a more tolerable adverse effect profile. We aimed to determine whether phenytoin or levetiracetam is the superior second-line treatment for paediatric convulsive status epilepticus.
Methods: ConSEPT was an open-label, multicentre, randomised controlled trial conducted in 13 emergency departments in Australia and New Zealand. Children aged between 3 months and 16 years, with convulsive status epilepticus that failed first-line benzodiazepine treatment, were randomly assigned (1:1) using a computer-generated permuted block (block sizes 2 and 4) randomisation sequence, stratified by site and age (≤5 years, >5 years), to receive 20 mg/kg phenytoin (intravenous or intraosseous infusion over 20 min) or 40 mg/kg levetiracetam (intravenous or intraosseous infusion over 5 min). The primary outcome was clinical cessation of seizure activity 5 min after the completion of infusion of the study drug. Analysis was by intention to treat. This trial is registered with the Australian and New Zealand Clinical Trials Registry, number ACTRN12615000129583.
Findings: Between March 19, 2015, and Nov 29, 2017, 639 children presented to participating emergency departments with convulsive status epilepticus; 127 were missed, and 278 did not meet eligibility criteria. The parents of one child declined to give consent, leaving 233 children (114 assigned to phenytoin and 119 assigned to levetiracetam) in the intention-to-treat population. Clinical cessation of seizure activity 5 min after completion of infusion of study drug occurred in 68 (60%) patients in the phenytoin group and 60 (50%) patients in the levetiracetam group (risk difference −9·2% [95% CI −21·9 to 3·5]; p=0·16). One participant in the phenytoin group died at 27 days because of haemorrhagic encephalitis; this death was not thought to be due to the study drug. There were no other serious adverse events.
Interpretation: Levetiracetam is not superior to phenytoin for second-line management of paediatric convulsive status epilepticus.
Funding: Health Research Council of New Zealand, A+ Trust, Emergency Medicine Foundation, Townsville Hospital Private Practice Fund, Eric Ormond Baker Charitable Fund, and Princess Margaret Hospital Foundation.