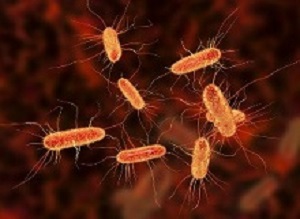 A study shows that a kind of E. coli most associated with "traveller’s diarrhoea" and children in underdeveloped areas of the world causes more severe disease in people with blood type A. The bacteria release a protein that latches onto intestinal cells in people with blood type A, but not blood type O or B, according to a study led by researchers at Washington University School of Medicine in St Louis. A vaccine targeting that protein could potentially protect people with type A blood against the deadliest effects of enterotoxigenic E. coli (Escherichia coli) infection.

"We think this protein is responsible for this blood-group difference in disease severity," said senior author Dr James Fleckenstein, an associate professor of medicine at Washington University. "A vaccine targeting this protein would potentially protect the individuals at highest risk for severe disease."

The work was conducted in collaboration with investigators at Johns Hopkins University, the National Institutes of Health (NIH) and the Naval Medical Research Centre.

Enterotoxigenic E. coli are responsible for millions of cases of diarrhoea and hundreds of thousands of deaths every year, mainly of young children. It primarily infects people living in or visiting developing countries. Some people infected with the bacterium develop severe, cholera-like, watery diarrhoea that can be lethal. Others experience unpleasant symptoms but recover easily, while some don't get sick at all.

Enterotoxigenic E. coli are not the cause of the current romaine lettuce-related outbreak. That outbreak involves a different kind of E. coli known as Shiga toxin-producing E. coli O157:H7.

Years ago, doctors noted that children naturally infected with enterotoxigenic E. coli in Bangladesh seemed to get sicker if they had blood type A, but the reason for this was never tested. Fleckenstein, instructor in medicine Dr Matthew Kuhlmann, postdoctoral researcher Dr Pardeep Kumar and colleagues investigated whether blood type influences disease severity by looking at what happened to people of different blood types who drank a cup of water laced with E. coli.

In controlled human infection clinical trials, researchers at Johns Hopkins University gave healthy volunteers a dose of an E. coli strain originally isolated from a person in Bangladesh with severe, cholera-like diarrhoea. Then, they observed the volunteers for five days. Those who developed moderate to severe diarrhoea were treated with antibiotics. The disease comes on quickly, so anyone who was still healthy at the end of five days was unlikely to get sick later. Nonetheless, any remaining healthy participants also were given antibiotics to clear the bacteria before going home.

Kuhlmann and colleagues obtained data and blood samples from 106 people, each of whom participated in one of four such studies. They found that people with blood type A got sick sooner and more seriously than those of other blood types. More than eight out of 10 (81%) of blood group A people developed diarrhoea that required treatment, as compared with about half of people with blood group B or O.

The effect of blood group in people infected with this strain of E. coli was striking and significant, but it doesn't mean people should change their behaviour based on blood type, the researchers said.

"I don't want anyone to cancel their travel plans to Mexico because they have type A blood," Kuhlmann said. "Or the converse: I don't want anyone to think they're safe because their blood group is not A. There are a lot of different species of bacteria and viruses that can cause diarrhoea, so even though this blood-group association is strong, it doesn't change your overall risk. You should continue taking the same precautions whatever your blood type."

Basic hygiene – washing hands and purifying water – is the best protection against diarrhoeal diseases because it works against all kinds of organisms. But the people who suffer most from diarrhoea are small children. For them, and others who don't have reliable access to basic sanitation or clean water, a vaccine could be lifesaving.

There are many strains of enterotoxigenic E. coli and developing a vaccine that protects against all of them has been a challenge because no single protein is found in all strains. To defend against as many strains as possible, scientists are studying dozens of proteins – but they still haven't found a way to cover all strains. The protein identified in this study is found in many strains, so adding it to the mix could provide broader protection, especially for people at the highest risk for severe disease.

Fleckenstein is listed as the inventor on US patent 12/079,304 which involves the EtpA adhesin described in this study.

Abstract
Enterotoxigenic Escherichia coli (ETEC) infections are highly prevalent in developing countries where clinical presentations range from asymptomatic colonization to severe cholera-like illness. The molecular basis for these varied presentations, that may involve strain-specific virulence features as well as host factors, have not been elucidated. We demonstrate that when challenged with ETEC strain H10407, originally isolated from a case of cholera-like illness, blood group A human volunteers developed severe diarrhea more frequently than individuals from other blood groups. Interestingly, a diverse population of ETEC strains, including H10407, secrete a novel adhesin molecule, EtpA. As many bacterial adhesins also agglutinate red blood cells, we combined the use of glycan arrays, biolayer inferometry, and non-canonical amino acid labeling with hemagglutination studies to demonstrate that EtpA is a dominant ETEC blood group A specific lectin/hemagglutinin. Importantly, we also show that EtpA interacts specifically with glycans expressed on intestinal epithelial cells from blood group A individuals, and that EtpA-mediated bacterial-host interactions accelerate bacterial adhesion and the effective delivery both heat-labile and heat-stable toxins of ETEC. Collectively, these data provide additional insight into the complex molecular basis of severe ETEC diarrheal illness that may inform rational design of vaccines to protect those at highest risk.