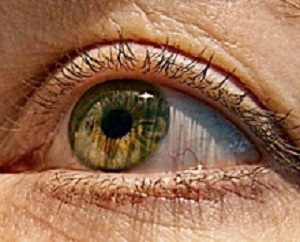 French scientists claim they may have found a physiological, and seemingly treatable, cause for dyslexia hidden in tiny light-receptor cells in the human eye. according to a study published in the Proceedings of the Royal Society.

In people with the condition, the cells were arranged in matching patterns in both eyes, which may be to blame for confusing the brain by producing “mirror” images, the co-authors write. In non-dyslexic people, the cells are arranged asymmetrically, allowing signals from the one eye to be overridden by the other to create a single image in the brain.

“Our observations lead us to believe that we indeed found a potential cause of dyslexia,” said the study’s co-author, Guy Ropars, of the University of Rennes. It offers a “relatively simple” method of diagnosis, he added, by simply looking into a subject’s eyes.

Furthermore, “the discovery of a delay (of about 10 thousandths of a second) between the primary image and the mirror image in the opposing hemispheres of the brain, allowed us to develop a method to erase the mirror image that is so confusing for dyslexic people” – using an LED lamp.

Like being left- or right-handed, human beings also have a dominant eye. As most of us have two eyes, which record slightly different versions of the same image, the brain has to select one of the two, creating a “non-symmetry”.

Many more people are right-eyed than left, and the dominant eye has more neural connections to the brain than the weaker one. Image signals are captured with rods and cones in the eye – the cones being responsible for colour.

The majority of cones, which come in red, green and blue variants, are found in a small spot at the centre of the retina of the eye known as the fovea. But there is a small hole (about 0.1-0.15 millimetres in diameter) with no blue cones.

In the new study, Ropars and colleague Albert le Floch spotted a major difference between the arrangement of cones between the eyes of dyslexic and non-dyslexic people enrolled in an experiment.

In non-dyslexic people, the blue cone-free spot in one eye – the dominant one, was round and in the other eye unevenly shaped. In dyslexic people, both eyes have the same, round spot, which translates into neither eye being dominant, they found. “The lack of asymmetry might be the biological and anatomical basis of reading and spelling disabilities,” said the study’s authors.

Dyslexic people make so-called “mirror errors” in reading, for example confusing the letters “b” and “d”. “For dyslexic students their two eyes are equivalent and their brain has to successively rely on the two slightly different versions of a given visual scene,” they added.

The team used an LED lamp, flashing so fast that it is invisible to the naked eye, to “cancel” one of the images in the brains of dyslexic trial participants while reading. In initial experiments, dyslexic study participants called it the “magic lamp,” said Ropars, but further tests are required to confirm the technique really works.

About 700m people worldwide are known to have from dyslexia – about one in 10 of the global population.

Abstract
In human vision, the brain has to select one view of the world from our two eyes. However, the existence of a clear anatomical asymmetry providing an initial imbalance for normal neural development is still not understood. Using a so-called foveascope, we found that for a cohort of 30 normal adults, the two blue cone-free areas at the centre of the foveas are asymmetrical. The noise-stimulated afterimage dominant eye introduced here corresponds to the circular blue cone-free area, while the non-dominant eye corresponds to the diffuse and irregular elliptical outline. By contrast, we found that this asymmetry is absent or frustrated in a similar cohort of 30 adults with normal ocular status, but with dyslexia, i.e. with visual and phonological deficits. In this case, our results show that the two Maxwell centroid outlines are both circular but lead to an undetermined afterimage dominance with a coexistence of primary and mirror images. The interplay between the lack of asymmetry and the development in the neural maturation of the brain pathways suggests new implications in both fundamental and biomedical sciences.