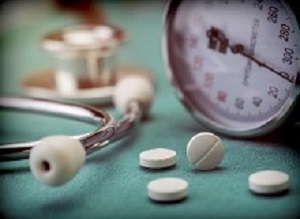 "Most people – 70% – reached blood pressure targets with the Triple Pill. The benefits were seen straight away and maintained until six months, whereas with usual care control rates were 55% at six months and even lower earlier in the trial," said Dr Ruth Webster, of The George Institute for Global Health at the University of New South Wales in Sydney, Australia, and lead author of the study. "Based on our findings, we conclude that this new method of using blood pressure-lowering drugs was more effective and just as safe as current approaches."

Achieving desired reductions in blood pressure often requires treatment with more than one medication, which increases the complexity of treatment, and patients often have difficulty adhering to regimens that involve taking multiple pills every day.

This study was the first large trial designed to test the theory that starting treatment with low doses of three drugs could achieve better blood pressure control compared with usual care and that combining these drugs in a single pill would make it easier both for doctors to prescribe treatment and for patients to adhere to it, Webster said.

Patients were randomly assigned to receive either the combination pill or usual care. The combination pill, or Triple Pill, consisted of the blood pressure medications telmisartan (20 mg), amlodipine (2.5 mg) and chlorthalidone (12.5 mg). These medications use different mechanisms to reduce blood pressure by relaxing the blood vessels, so the heart does not need to pump as hard to send blood throughout the body. Usual care meant that patients received their doctor's choice of blood pressure-lowering medication.

The trial's primary endpoint was the proportion of patients who achieved a blood pressure target of 140/90 mm Hg or less (130/80 mm Hg or less in those with diabetes or chronic kidney disease) at six months.

Rates of participants having to change treatment due to side effects were not significantly different in the two groups (6.6% for the Triple Pill, 6.8% for usual care). This should allay concerns that use of the three-drug combination pill could lead to an unacceptable increase in adverse medication side effects, Webster said.

Each of the drugs used in the Triple Pill has been shown to be highly effective in reducing blood pressure and preventing deaths and illness due to heart disease and strokes, she said. Each drug represents a different class of blood pressure medication and previous studies have shown that combining such drugs results in synergistic effects.

"The most urgent need for innovative strategies to control blood pressure is in low- and middle-income countries," Webster said. "The Triple Pill approach is an opportunity to 'leap frog' over traditional approaches to care and adopt an innovative approach that has been shown to be effective."

The study's findings are also important for high-income countries, she said. "A control rate of 70% would be a considerable improvement even in high-income settings. Most hypertension guidelines in these countries do not recommend combination blood pressure-lowering therapy for initial treatment in all people," she said. "Our findings should prompt reconsideration of recommendations around the use of combination therapy."

An inevitable consequence of a necessarily unblinded study (where both participants and their doctors know whether participants are assigned to the Triple Pill or usual care) is that doctors might manage patients differently depending on the assigned treatment. However, it is important to note this trial was designed to evaluate a new strategy of care in a real-world setting, Webster said.

To minimise the risk of bias in measuring the main outcomes, the number of patient visits was identical in both groups and all outcomes were standardised and objectively documented, she said.

The researchers are now conducting a follow-up qualitative study to find out what participants and their doctors thought about using the Triple Pill. And they are conducting a cost effectiveness evaluation to determine whether the Triple Pill is a cost-effective solution for blood pressure control.

Recommended targets for blood pressure control vary by country. In the US, guidance released in 2017 by the ACC and the American Heart Association recommends initiating treatment if blood pressure exceeds 130/80 mm Hg. European guidelines recommend that treatment should aim to achieve a blood pressure level of 140/90 mm Hg or less.

Abstract
Background: Poorly-controlled hypertension is a major public health problem globally. With increasingly lower treatment thresholds and targets, novel pharmacological approaches are required. We hypothesized that initial treatment with low-dose triple combination therapy would safely achieve better blood pressure (BP) control, compared with usual care.
Methods: The Triple Pill versus Usual Care Management for Patients with Mild-Moderate Hypertension study was a randomized, open-label trial conducted in Sri Lanka. Adults with hypertension requiring initiation (untreated patients) or up-titration (patients on monotherapy) of drug treatment were eligible, with randomization to “Triple Pill” or “usual care”. Triple Pill patients received a fixed-dose combination pill containing telmisartan 20mg, amlodipine 2.5mg, chlorthalidone 12.5mg, with the option to use a double dose version at or after 6 weeks. No attempt was made to influence usual care. The primary outcome was the proportion of patients achieving BP target (≤140/90 mmHg [≤130/80 in patients with diabetes or chronic kidney disease]) at 6 months.
Results: 700 participants were randomized. At baseline, the mean age was 56 years, 58% were women, 32% had diabetes or chronic kidney disease, 48% were untreated and the mean BP was 154/90 mmHg. At 6 months, 83% of the Triple Pill group were still receiving study drug with a third of the usual care group receiving at least 2 BP lowering drugs. Among 647 patients with data at 6 months, the Triple Pill strategy was associated with greater achievement of BP target levels compared to usual care (70% vs. 55%; RR 1.23 [95% CI 1.09, 1.39] p=0.0007), with the maximum difference observed at 6 weeks (68% vs. 44%; RR 1.53 [1.33, 1.76]). Mean BP reduction with Triple Pill compared to usual care at 6 months was 8.7/4.5 mmHg. There was no significant difference in adverse events between randomized groups (38.7% vs. 34.7%, p=0.31). There was no significant heterogeneity in efficacy by baseline use of BP lowering drugs.
Conclusion: Initial use of low-dose triple combination therapy is a safe and highly effective strategy to rapidly achieve BP control.