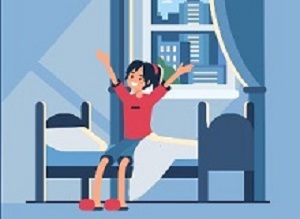 Middle-to-older aged women who are naturally early to bed and early to rise are significantly less likely to develop depression, according to a large study by researchers at University of Colorado Boulder and the Channing division of network medicine at Brigham and Women's Hospital in Boston.

The study of more than 32,000 female nurses, is the largest and most detailed observational study yet to explore the link between chronotype, or sleep-wake preference, and mood disorders.

It shows that even after accounting for environmental factors like light exposure and work schedules, chronotype – which is in part determined by genetics – appears to mildly influence depression risk. "Our results show a modest link between chronotype and depression risk. This could be related to the overlap in genetic pathways associated with chronotype and mood," said lead author Céline Vetter, director of the Circadian and Sleep Epidemiology Laboratory (CASEL) at CU Boulder.

Previous studies have shown that night owls are as much as twice as likely to suffer from depression. But because those studies often used data at a single time-point and didn't account for many other factors that influence depression risk, it has been hard to determine whether depression leads people to stay up later or a late chronotype boosts risk of depression.

To shed light on the question, researchers used data from 32,470 female participants, average age 55, in the Nurses' Health Study, which asks nurses to fill out health questionnaires biennially.

The researchers found that late chronotypes, or night owls, are less likely to be married, more likely to live alone and be smokers, and more likely to have erratic sleep patterns. After accounting for these factors, they found that early risers still had a 12%-27% lower risk of being depressed than intermediate types. Late types had a 6% higher risk than intermediate types (this modest increase was not statistically significant.) "This tells us that there might be an effect of chronotype on depression risk that is not driven by environmental and lifestyle factors," said Vetter.

Genetics play a role in determining whether you are an early bird, intermediate type, or night owl, with research showing 12%-42% heritability. And some studies have already shown that certain genes (including PER2 and RORA), which influence when we prefer to rise and sleep, also influence depression risk.

Vetter stresses that while the study does suggest that chronotype is an independent risk factor for depression, it does not mean night owls are doomed to be depressed. "Yes, chronotype is relevant when it comes to depression but it is a small effect," she says, noting that her study found a more modest effect than previous ones have.

Her advice to night owls who want to lower their risk? "Being an early type seems to beneficial, and you can influence how early you are" she said. Try to get enough sleep, exercise, spend time outdoors, dim the lights at night, and try to get as much light by day as possible.

Abstract
Background: Prior cross-sectional studies have suggested that being a late chronotype is associated with depression and depressive symptoms, but prospective data are lacking.
Methods: We examined the association between chronotype and incident depression (defined as self-reported physician/clinician-diagnosed depression or antidepressant medication use) in 32,470 female participants of the Nurses’ Health Study II cohort who self-reported their chronotype (early, intermediate or late) and were free of depression at baseline in 2009 (average age: 55 yrs). Women updated their depression status on biennial questionnaires in 2011 and 2013. We used multivariable (MV)-adjusted Cox proportional hazards models to estimate hazard ratios (HR) and 95% confidence intervals (95%CI) for incident depression across chronotype categories (i.e., early, intermediate, and late chronotypes).
Results: Across a follow-up period of 4 years, we observed 2,581 cases of incident depression in this cohort. Compared to intermediate chronotypes, early chronotypes had a modestly lower risk of depression after MV adjustment (MVHR = 0.88, 95%CI = 0.81–0.96), whereas late chronotypes had a similar risk of 1.06 (95%CI = 0.93–1.20); the overall trend across chronotype categories was statistically significant (ptrend<0.01). Results were similar when we restricted analyses to women who reported average sleep durations (7–8 h/day) and no history of rotating night shift work at baseline.
Conclusions: Our results suggest that chronotype may influence the risk of depression in middle-to older-aged women. Additional studies are needed to confirm these findings and examine roles of both environmental and genetic factors to further our understanding of the role of chronotype in the etiology of mood disorders.