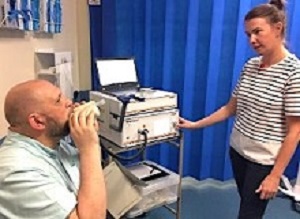 An ‘electronic nose’ that can sniff out bacteria could be used to curb the use of antibiotics when not necessary, according to scientists at Warwick University. The technology could help doctors at GP practices to quickly diagnose the common cold or the flu, conditions that antibiotics cannot help with.

The nose analyses the breath sample after a patient has blown into a breathing tube, just as they would with a police breathalyser. Certain chemicals are then identified, signalling whether or not bacteria is present.

Warwick University’s Professor James Covington, who developed the ‘electronic nose’, said he hopes it will one day help reduce the number of antibiotic prescriptions. “I want to try and make the drugs we have last longer,” he said. “Our idea is that we are going to get breath and we are going to sniff it. Smelling breath gives access to the body’s biological process.

“We are trying to reduce the number of people being prescribed medication. If you can reduce this by 20%, that is a massive saving.”

Preliminary trial results from the BreathSpec project, which was led by Imspex, suggest it has 80% accuracy. It was found that of these, 406 had an upper respiratory infection, of which 376 were non-bacterial and 30 were bacterial. There were 520 people with lower respiratory infection, 272 of which were non-bacterial, 248 were bacterial and 186 had neither.

Covington said: “In essence, we were about 80% accurate: we could tell 80% of patients who did not have bacterial infections. This could be a cold or a flu or one of the other ones – that is pretty good for a general screening situation. To an extent, you could also say that we could accurately state that eight out of 10 patients had the flu or common cold.”