How to kick cellphone addiction — And other bad habits 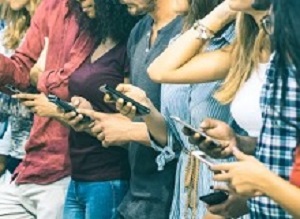 Changing old habits or forming new ones is hard. Yet, some people seem to struggle less than the rest of us. Who are these people? asks Wendy Wood, professor of psychology and business at the University of Southern California, in the Los Angeles Times. Research shows that they understand how to make habits work as a kind of ‘second self’ directing their daily actions. Knowing how to train this internal autopilot makes it easier to turn it on or off.

You probably check your work email after the conventional workday is done, as 59% of American workers do. Even if you never get a late-night ‘quick question’ email from your boss, you’re probably still using your cellphone to check Facebook or Twitter or play the latest game.

Just hearing the ping of an incoming message attracts attention, distracts you from focusing on the people around you and impairs performance at what you’re currently doing. You check the phone when it vibrates, when it pings, when you sit down to breakfast, get out of your car, get into the office, get in the elevator, get out of the elevator. In fact, Americans check their phones on average 52 times a day.

If you’re struggling to control your cellphone habit, you’re not alone. Changing old habits or forming new ones is hard. Yet, some people seem to struggle less than the rest of us.

Who are these people? Research shows that they understand how to make habits work as a kind of “second self” directing their daily actions. If you know how to train this internal autopilot, you will find it easier to turn it on or off.

Consider your weekly trip to the supermarket. Same car, same road, same destination, maybe even the same grocery list. In that 10-minute drive, you easily pilot a 4,000-pound piece of machinery and put geometry into practice as you ease into that last parking spot. All done on autopilot. And even though going into traffic is very likely the most dangerous part of your day, you can go through these motions largely drama-free.

That’s because the functioning of habits is self-contained and simply doesn’t require us to think very much. The automatic scripts our brains piece together when we repeatedly do the same thing in the same way are called procedural memory. It’s such an important repository of information that only the most frequently repeated and habitual patterns get stored like this.

This kind of cognitive coding is a sort of mental equivalent of admin-only files on your computer. Your computer’s best functioning relies on you not messing around in its most fundamental code, which is stashed away behind other layers of code. Our lack of insight into our habits is a defining feature, not an error or mistake.

Some benefits are obvious. Habit memory is one reason you don’t forget how to ride a bike regardless of how well you learn to ride a skateboard or surf. The original memory trace sticks around, undisturbed by your new experiences. Other advantages are more subtle, like insulating us against temptations. Once you have formed a good habit to eat carrots, for example, you tend to repeat it even when chocolate is available.

In a recent survey from my lab, about a third of respondents said they were successful at changing old habits and forming new ones (you can check out your score on this scale at goodhabitsbadhabits.org).

This doesn’t involve just single feats of willpower. Instead, some people excel at actions like regularly taking medications – ones that can be done efficiently, without intentionality and without conscious control. In daily life, they meet their goals of exercising, eating a healthy diet and studying at school by forming habits to do so.

Of course, habit persistence is also responsible for many of our failures at behaviour change. Even the most heartfelt resolution can’t erase what’s stored in habit memory. For instance, most people eat the same things for breakfast every morning (or skip it entirely), regardless of how much they have eaten the night before. People who have a habit of eating popcorn at the cinema will keep eating it even if it’s stale.

Habits keep us on track to repeat past behaviour. That track sometimes reflects our current desires, but sometimes not.

Those who successfully form new habits recognise the power of learning through doing. No willpower necessary. By acting repeatedly, our minds come to associate recurring cues (car, route) with a response (driving, parking) that got a reward in the past (bag of groceries!).

When given a list of common behaviours, such as drinking coffee first thing in the morning or striking up a conversation with an attractive person at the grocery store, people who successfully changed their behaviour were especially accurate in identifying actions that are habit-based. They recognised that repeated actions, like weekly recycling, can be carried out by their second selves, whereas one-off acts, like asking someone out on a date, require more thought and active decision-making.

These people also understood that immediate rewards help to build habits. Our brains register rewards with the neurotransmitter, dopamine. Its release helps to stamp habit associations into memory. But dopamine reactions are brief. Thus, the promise of large rewards in the future aren’t likely by themselves to help form beneficial habits. Enjoying the new behaviour itself and feeling pride in the moment are the fuel that builds habits in memory.

Once a habit has formed, just perceiving the cues brings the practiced response to mind. You don’t need to be motivated to act on habit.

As a society, we took this approach to reduce the smoking rate. By taxing cigarettes, banning smoking in public places and reducing ads and other cues, the percentage of Americans who smoke has been brought down to 15%.

To curb that cellphone habit, try disrupting cues by turning it off, burying it deep in your backpack or leaving it at home. It also helps to replace the habit with an activity that’s enjoyable. You could, for instance, get a watch that you like and want to show off. Get a colourful watch, a watch with a timer, an interesting old mechanical watch (just don’t get a smartwatch), so that glancing at the watch becomes a replacement behaviour.

And reward yourself for not checking your phone by doing something that’s perfect for occupying your mind for a few minutes. Something that’ll nourish your whole self. Got a good book to read?

* Wendy Wood is a professor of psychology and business at USC. She is the author of “Good Habits, Bad Habits: The Science of Making Positive Changes That Stick.”

[link url="https://www.latimes.com/opinion/story/2019-10-13/cellphones-habits-psychology-brain-science"]Opinion: How to kick your cellphone addiction — and other bad habits, too[/link]