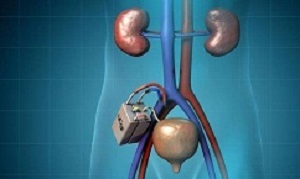 US scientists have successfully implanted a prototype kidney bioreactor containing functional human kidney cells into pigs without significant safety concerns. Separately,  a study found that an Automated Wearable Artificial Kidney device can effectively remove toxins from the blood of patients with kidney failure.

The studies were presented at the American Society of Nephrology Kidney Week 2019 in Washington, DC.

The Kidney Project, a national effort to develop an implantable bio-artificial kidney that could eliminate the need for dialysis, has announced a key milestone.

The team reported that University of California San Francisco scientists have successfully implanted a prototype kidney bioreactor containing functional human kidney cells into pigs without significant safety concerns. The device, which is about the size of a deck of cards, did not trigger an immune reaction or cause blood clots in the animals, an important milestone on the road to future human trials.

"This is the first demonstration that kidney cells can be implanted successfully in a large animal without immunosuppression and remain healthy enough to perform their function. This is a key milestone for us," said Kidney Project co-lead Dr Shuvo Roy, a faculty member in the department of bioengineering and therapeutic sciences, a joint department of the UCSF Schools of Pharmacy and Medicine. "Based on these results, we can now focus on scaling up the bioreactor and combining it with the blood filtration component of the artificial kidney."

Nearly 750,000 Americans – and 2m people around the world – are treated for end-stage renal disease (ESRD), and rates of kidney disease are growing rapidly, leading to an urgent shortage of kidneys for transplant. As of 2016 there were only 21,000 donor kidneys available for transplant in the US on a waiting list of nearly 100,000 and extending five to ten years.

Most patients awaiting a kidney transplant survive by undergoing long and cumbersome dialysis treatments multiple times a week to clear toxins from their blood, but dialysis does not replace many essential kidney functions and on average, only 35% of dialysis patients remain alive after five years. Dialysis and other treatments for ESRD, which are universally covered by Medicare, cost $35bn in 2016, representing 7% of Medicare's annual budget.

The Kidney Project is led by Roy and Vanderbilt University Medical Centre nephrologist Dr William H Fissell, who for more than a decade have been working to develop an implantable bio-artificial kidney with the goal of eliminating dialysis and easing the shortage of donor kidneys.

The implantable device being developed by The Kidney Project consists of two components: an blood filtration system called the haemo-filter, which removes toxins from the blood by passing it through silicon membranes fabricated with precisely shaped nano-metre-scale pores; and a bioreactor, which contains cultured human kidney cells intended to perform other kidney functions, such as maintaining adequate fluid volume and blood pressure, adjusting salt levels, and producing essential hormones.

Following promising studies in large animals, The Kidney Project's haemo-filtration system is currently awaiting FDA approval for an initial clinical trial to evaluate its safety. The bioreactor technology has been tested in laboratory experiments but so far had not been implanted into animals.

In The Kidney Project's presentation, Dr Rebecca Gologorsky, a UCSF surgical innovations ellow on the team, will show how silicon membranes inside the implanted bioreactor protect the enclosed human kidney cells from the host immune system by keeping blood-borne immune cells and proteins out of the device.

"It has been a holy grail of transplant therapies to find ways to avoid the need for lifelong immunosuppressive drugs that are often required to prevent immune rejection," Roy said. "These drugs not only expose patients to infection and other harmful side-effects but have been shown to directly harm transplanted cells and organs, eroding the therapeutic benefit of transplants over time."

Roy's team also carefully engineered the prototype bioreactor to avoid triggering blood clots that could lead to pulmonary embolism or stroke, a major challenge faced by all patients with long-term medical implants. They achieved this by coating the silicon membrane filters that contact the blood with biologically friendly molecules and engineering the device to avoid the turbulent blood flow that can also trigger clotting.

"We couldn't use the standard blood-friendly coatings that have been developed for heart valves, catheters, and other devices because they are so thick that they would completely block the pores of our silicon membranes," Roy said. "One of our accomplishments has been to engineer a suitable surface chemistry on our silicon membranes that makes them look biologically friendly to blood."

The results, Roy says, demonstrate progress towards The Kidney Project's hoped-for clinical "trifecta": a heart-powered device that runs without batteries or other external connections that could introduce infection risk, and which can clean the blood without anti-rejection drugs or blood thinners.

The researchers now aim to scale up the prototype bioreactor to contain more cells in order to test whether the implanted device can supplement kidney function in animals with kidney failure, with the ultimate goal of eventually moving the device to human safety trials.

"Advancing a complex cell therapy like this into the clinic will not be a trivial task – for instance, it will require substantial investments in cell production and characterisation in controlled GMP facilities to avoid any possibility of contamination," Roy said. "Now we've confirmed that we're on the right track to move forward with these efforts."

Abstract
Background: An implantable bioartificial kidney will use a bioreactor containing human cells to provide renal cell therapy. The bioreactor must provide an immunoprotected environment for renal tubule cells (RTC) that obviates the need for immunosuppression. Furthermore, RTC differentiation and functionality must be maintained in vivo.
Methods: We developed an immunoprotection chamber using silicon nanopore membranes (SNM) with sub-10nm wide slit pores and evaluated primary human renal epithelial cell viability and functionality in a benchtop model and in vivo. For the benchtop, we created a stacked dual-chamber vessel, with human RTC in the inferior chamber isolated by SNM. After exposure to 500ng/mL TNF-α, RTC were evaluated for viability and monolayer integrity using cell viability assay, transepithelial electrical resistance, and immunohistochemistry. Thereafter, we implanted an analogous bioreactor in a pig without systemic anticoagulation, with the device perifused by connections to the carotid artery and jugular vein. A static in vitro control was used for comparison. The device was explanted after three days for RTC evaluation. ELISA and quantitative PCR (qPCR) were used to examine RTC-specific markers that are surrogates for RTC functionality.
Results: Benchtop testing showed that isolated RTC were confluent and >90% viable, whereas cells directly exposed to TNF-α were nonviable. In vivo, there were no thrombi in the device. Cells were confluent with >90% viability and maintained intercellular interaction/signal transduction via tight junctions/diffuse expression of Zona Occludens-1 protein similar to static control. Implanted RTC had low NAGexpression at <10% the rate of positive control indicating minimal damage to RTC while implanted. Expression of AQP1, 1a Hydroxylase, and NHE3 was up-regulated in implanted cells and twofold higher than static controls, suggesting greater functionality of implanted cells.
Conclusion: We present a kidney bioreactor tested in vivo that sustains implanted human renal cells in a xenogeneic environment without systemic anticoagulation. These data demonstrate the promise of a SNM-based bioreactor for use in implantable bioartificial kidney without immunosuppression.