Inflammation — the possible link between heart disease and depression 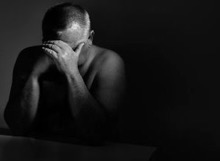 People with heart disease are more likely to suffer from depression, and the opposite is also true. Now, scientists at the University of Cambridge believe they have identified a link between these two conditions: inflammation – the body's response to negative environmental factors, such as stress.

While inflammation is a natural response necessary to fight off infection, chronic inflammation – which may result from psychological stress as well as lifestyle factors such as smoking, excessive alcohol intake, physical inactivity and obesity – is harmful.

The link between heart disease and depression is well documented. People who have a heart attack are at a significantly higher risk of experiencing depression. Yet scientists have been unable to determine whether this is due to the two conditions sharing common genetic factors or whether shared environmental factors provide the link.

"It is possible that heart disease and depression share common underlying biological mechanisms, which manifest as two different conditions in two different organs – the cardiovascular system and the brain," says Dr Golam Khandaker, a Wellcome Trust intermediate clinical fellow at the University of Cambridge. "Our work suggests that inflammation could be a shared mechanism for these conditions."

Khandaker and colleague Dr Stephen Burgess led a team of researchers from Cambridge who examined this link by studying data relating to almost 370,000 middle-aged participants of UK Biobank. First, the team looked at whether family history of coronary heart disease was associated with risk of major depression. They found that people who reported at least one parent having died of heart disease were 20% more likely to develop depression at some point in their life.

Next, the researchers calculated a genetic risk score for coronary heart disease – a measure of the contribution made by the various genes known to increase the risk of heart disease. Heart disease is a so-called 'polygenic' disease – in other words, it is caused not by a single genetic variant, but rather by a large number of genes, each increasing an individual's chances of developing heart disease by a small amount. Unlike for family history, however, the researchers found no strong association between the genetic predisposition for heart disease and the likelihood of experiencing depression.

Together, these results suggest that the link between heart disease and depression cannot be explained by a common genetic predisposition to the two diseases. Instead, it implies that something about an individual's environment – such as the risk factors they are exposed to – not only increases their risk of heart disease, but at the same time increases their risk of depression.

This finding was given further support by the next stage of the team's research. They used a technique known as Mendelian randomisation to investigate 15 biomarkers – biological 'red flags' – associated with increased risk of coronary heart disease.

Mendelian randomisation is a statistical technique that allows researchers to rule out the influence of factors that otherwise confuse, or confound, a study, such as social status. Of these common biomarkers, they found that triglycerides (a type of fat found in the blood) and the inflammation-related proteins IL-6 and CRP were also risk factors for depression.

Both IL-6 and CRP are inflammatory markers that are produced in response to damaging stimuli, such as infection, stress or smoking. Studies by Khandaker and others have previously shown that people with elevated levels of IL-6 and CRP in the blood are more prone to develop depression, and that levels of these biomarkers are high in some patients during acute depressive episode. Elevated markers of inflammation are also seen in people with treatment resistant depression. This has raised the prospect that anti-inflammatory drugs might be used to treat some patients with depression.

Khandaker is currently involved in a clinical trial to test tocilizumab, an anti-inflammatory drug used for the treatment of rheumatoid arthritis that inhibits IL-6, to see if reducing inflammation leads to improvement in mood and cognitive function in patients with depression.

While the link between triglycerides and coronary heart disease is well documented, it is not clear why they, too, should contribute to depression. The link is unlikely to be related by obesity, for example, as this study has found no evidence for a causal link between body mass index (BMI) and depression.

"Although we don't know what the shared mechanisms between these diseases are, we now have clues to work with that point towards the involvement of the immune system," says Burgess. "Identifying genetic variants that regulate modifiable risk factors helps to find what is actually driving disease risk."

The research was funded by Wellcome and MQ: Transforming Mental Health. Dr Sophie Dix, director of research at MQ, says: "This study adds important new insight into the emergence and risk of depression, a significantly under researched area.

"Taking a holistic view of a person's health – such as looking at heart disease and depression together – enables us to understand how factors like traumatic experiences and the environment impact on both our physical and mental health.

"This research shows clearly the shared biological changes that are involved. This not only opens opportunities for earlier diagnosis, but also create a solid foundation for exploring new treatments or using existing treatments differently. We need to stop thinking about mental and physical health in isolation and continue this example of bringing sciences together to create real change."

Abstract
While comorbidity between coronary heart disease (CHD) and depression is evident, it is unclear whether the two diseases have shared underlying mechanisms. We performed a range of analyses in 367,703 unrelated middle-aged participants of European ancestry from UK Biobank, a population-based cohort study, to assess whether comorbidity is primarily due to genetic or environmental factors, and to test whether cardiovascular risk factors and CHD are likely to be causally related to depression using Mendelian randomization. We showed family history of heart disease was associated with a 20% increase in depression risk (95% confidence interval [CI] 16–24%, p < 0.0001), but a genetic risk score that is strongly associated with CHD risk was not associated with depression. An increase of 1 standard deviation in the CHD genetic risk score was associated with 71% higher CHD risk, but 1% higher depression risk (95% CI 0–3%; p = 0.11). Mendelian randomization analyses suggested that triglycerides, interleukin-6 (IL-6), and C-reactive protein (CRP) are likely causal risk factors for depression. The odds ratio for depression per standard deviation increase in genetically-predicted triglycerides was 1.18 (95% CI 1.09–1.27; p = 2 × 10−5); per unit increase in genetically-predicted log-transformed IL-6 was 0.74 (95% CI 0.62–0.89; p = 0.0012); and per unit increase in genetically-predicted log-transformed CRP was 1.18 (95% CI 1.07–1.29; p = 0.0009). Our analyses suggest that comorbidity between depression and CHD arises largely from shared environmental factors. IL-6, CRP and triglycerides are likely to be causally linked with depression, so could be targets for treatment and prevention of depression.