The long-term risks of having your tonsils out 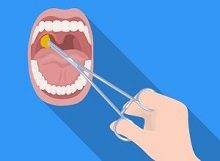 Removing tonsils and adenoids in childhood increases the long-term risk of respiratory, allergic and infectious diseases, according to researchers who have examined – for the first time – the long-term effects of the operations.

The researchers suggest renewed evaluation of alternatives to these common paediatric surgeries that include removal of tonsils (tonsillectomy) to treat chronic tonsillitis or adenoids (adenoidectomy) to treat recurrent middle ear infections.

The adenoids and tonsils are strategically positioned in the nose and throat respectively to act as a first line of defence, helping to recognise airborne pathogens like bacteria and viruses, and begin the immune response to clear them from the body.

The collaborative study initiated by the Copenhagen Evolutionary Medicine programme looked at the long-term effects of removing the tonsils and adenoids in childhood, compared with children who had not undergone the surgeries.

The team analysed a dataset from Denmark of 1,189,061 children born between 1979 and 1999, covering at least the first 10 years and up to 30 years of their life. Of the almost 1.2m children, 17,460 had adenoidectomies, 11,830 tonsillectomy and 31, 377 had adenotonsillectomies, where both tonsils and adenoids removed. The children were otherwise healthy.

"We calculated disease risks depending on whether adenoids, tonsils or both were removed in the first 9 years of life because this is when these tissues are most active in the developing immune system," Byars said.

The analysis showed:
Tonsillectomy was associated with an almost tripled relative risk – the risk for those who had the operation compared with those who didn't – for diseases of the upper respiratory tract. These included asthma, influenza, pneumonia and chronic obstructive pulmonary disorder (COPD), the umbrella term for diseases such as chronic bronchitis and emphysema.

The absolute risk (which takes into account how common these diseases are in the community) was also substantially increased at 18.61%.

Adenoidectomy was found to be linked with a more than doubled relative risk of COPD and a nearly doubled relative risk of upper respiratory tract diseases and conjunctivitis. The absolute risk was also almost doubled for upper respiratory diseases but corresponded to a small increase for COPD, as this is a rarer condition in the community generally.

"The association of tonsillectomy with respiratory disease later in life may therefore be considerable for those who have had the operation," Boomsma said.

The team delved deeper into the statistics to reveal how many operations needed to be performed for a disease to occur at a greater rate than normal, known as the number needed to treat or NNT. "For tonsillectomy, we found that only five people needed to have the operation to cause an extra upper respiratory disease to appear in one of those people," added Boomsma.

The team also analysed conditions that these surgeries directly aimed to treat, and found mixed results:

Adenoidectomy was associated with a significantly reduced risk for sleep disorders and all surgeries were associated with significantly reduced risk for tonsillitis and chronic tonsillitis, as these organs were now removed.
However, there was no change in abnormal breathing up to the age of 30 for any surgery and no change in sinusitis after tonsillectomy or adenoidectomy.
Following adenotonsillectomy the relative risk for those who had the operation was found to increase four or five-fold for otitis media (inflammation of the middle ear) and sinusitis also showed a significant increase.

The study suggests that shorter-term benefits of these surgeries may not continue up to the age of 30 apart from the reduced risk for tonsillitis (for all surgeries) and sleep disorders (for adenoidectomy). Instead, the longer-term risks for abnormal breathing, sinusitis and otitis media were either significantly higher after surgery or not significantly different.

The researchers note that there will always be a need to remove tonsils and adenoids when those conditions are severe. "But our observed results that show increased risks for long-term diseases after surgery support delaying tonsil and adenoid removal if possible, which could aid normal immune system development in childhood and reduce these possible later-life disease risks, Byars said.

"As we uncover more about the function of immune tissues and the lifelong consequences of their removal, especially during sensitive ages when the body is developing, this will hopefully help guide treatment decisions for parents and doctors."

Abstract
Importance: Surgical removal of adenoids and tonsils to treat obstructed breathing or recurrent middle-ear infections remain common pediatric procedures; however, little is known about their long-term health consequences despite the fact that these lymphatic organs play important roles in the development and function of the immune system.
Objective: To estimate long-term disease risks associated with adenoidectomy, tonsillectomy, and adenotonsillectomy in childhood.
Design, Setting, and Participants: A population-based cohort study of up to 1 189 061 children born in Denmark between 1979 and 1999 and evaluated in linked national registers up to 2009, covering at least the first 10 and up to 30 years of their life, was carried out. Participants in the case and control groups were selected such that their health did not differ significantly prior to surgery.
Exposures: Participants were classified as exposed if adenoids or tonsils were removed within the first 9 years of life.
Main Outcomes and Measures: The incidence of disease (defined by International Classification of Diseases, Eighth Revision [ICD-8] and Tenth Revision [ICD-10] diagnoses) up to age 30 years was examined using stratified Cox proportional hazard regressions that adjusted for 18 covariates, including parental disease history, pregnancy complications, birth weight, Apgar score, sex, socioeconomic markers, and region of Denmark born.
Results: A total of up to 1 189 061 children were included in this study (48% female); 17 460 underwent adenoidectomy, 11 830 tonsillectomy, and 31 377 adenotonsillectomy; 1 157 684 were in the control group. Adenoidectomy and tonsillectomy were associated with a 2- to 3-fold increase in diseases of the upper respiratory tract (relative risk [RR], 1.99; 95% CI, 1.51-2.63 and RR, 2.72; 95% CI, 1.54-4.80; respectively). Smaller increases in risks for infectious and allergic diseases were also found: adenotonsillectomy was associated with a 17% increased risk of infectious diseases (RR, 1.17; 95% CI, 1.10-1.25) corresponding to an absolute risk increase of 2.14% because these diseases are relatively common (12%) in the population. In contrast, the long-term risks for conditions that these surgeries aim to treat often did not differ significantly and were sometimes lower or higher.
Conclusions and Relevance: In this study of almost 1.2 million children, of whom 17 460 had adenoidectomy, 11 830 tonsillectomy, and 31 377 adenotonsillectomy, surgeries were associated with increased long-term risks of respiratory, infectious, and allergic diseases. Although rigorous controls for confounding were used where such data were available, it is possible these effects could not be fully accounted for. Our results suggest it is important to consider long-term risks when making decisions to perform tonsillectomy or adenoidectomy.