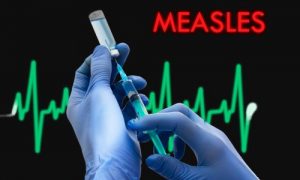 A huge surge in measles across Europe has been reported by the World Health Organisation, which says low MMR vaccination rates are to blame. More than 41,000 cases of measles have been reported in region between January and June, up from nearly 12,000 in all of 2017.

The Guardian reports that last year was the highest count in any year of the last decade.

“We are seeing a dramatic increase in infections and extended outbreaks,” said Dr Zsuzsanna Jakab, WHO regional director for Europe. “We call on all countries to immediately implement broad, context-appropriate measures to stop further spread of this disease.”

The report says in seven countries (France, Georgia, Greece, Italy, the Russian Federation, Serbia and Ukraine) more than 1,000 children and adults have been infected in the first half of 2018 and at least 37 people have died. The biggest toll was in the Ukraine, which had 23,000 cases – half the European total. There were measles-related deaths in all seven countries. Serbia, with 14, had the most.

Two countries that had eliminated measles had outbreaks that continued for 12 months. The report says the measles status of Germany and Russia has been reclassified by the WHO to endemic as a result. The outbreak in Germany began in Duisburg in early 2017 and spread to other cities.

The WHO goal to eliminate measles from Europe by 2020 faces major problems because of regions or cities with particularly low vaccination rates and the easy transmission across borders of the measles virus, which is one of the most infectious agents known. The report says some of the deaths in Greece in 2016 were in the Roma community, who had not had access to immunisation clinics. Outbreaks in Romania, Italy or Austria quickly spread as people travel for migration, work or pleasure.

But the virus can do no harm in communities that have been fully immunised – WHO says 95% need to have been vaccinated to prevent transmission.

The report says confidence in the MMR (measles, mumps and rubella) jab slumped after the gastroenterologist Andrew Wakefield at the Royal Free Hospital in London published a paper in the Lancet in 1998 wrongly alleging a link between the vaccine and autism. The paper was retracted and Wakefield, who had not declared he was taking money from solicitors hoping to pursue vaccine damage cases, was struck off the medical register for dishonesty and irresponsibility.

Take-up of the MMR by parents for their children recovered across Europe, but there have been pockets of hesitancy and denial in every country, creating areas in which the general immunisation rate is too low to protect unvaccinated children.

The cause of the vaccine doubters has been embraced by some political movements, who advocate “parent choice”. The report says the Five Star movement in Italy opposes a law that would have fined parents who do not immunise their children, while in France, Marine le Pen of the newly-renamed National Rally party is against mandatory vaccination.

The record number of cases “is a reflection of so many children and adolescents who are still susceptible to the disease because they are not vaccinated,” Mark Muscat, medical officer for vaccine-preventable diseases at WHO Europe is quoted in the report as saying. “This is a disease that could be totally prevented by two doses of MMR vaccine, but we are seeing measles cases across all age groups.”

In 2016, there was a record low number of cases – just 5,273 across the WHO’s Europe region. “But it doesn’t mean there were no susceptible individuals. It was simmering in the background. When you get importation of the measles virus, it spreads like wildfire and will infect everybody who is still susceptible to the disease,” he said.

Some parents do not take their child for vaccination while others delay. “I think there is hesitancy for very many reasons,” he said. “There are a lot of rumours and misinformation about safety. There are also problems where some parents have limited access to health systems and some have become complacent. They do not realise the importance of vaccinating their children because the disease is not around.

“That is totally wrong. Unfortunately, we have some measles-related deaths. Last year it was 38. This year it is already 37 in the first six months.”

“We have seen a number of measles outbreaks in England which are linked to ongoing large outbreaks in Europe,” said Dr Mary Ramsay, head of immunisation at Public Health England. “The majority of cases we are seeing are in teenagers and young adults who missed out on their MMR vaccine when they were children.”

Dr Pauline Paterson, co-director of The Vaccine Confidence Project team at the London School of Hygiene & Tropical Medicine, called the high number of measles cases so far this year “astounding”. “While most people vaccinate, some individuals do not. The reasons for non-vaccination can vary from issues of vaccine access, a lack of perceived need to vaccinate, and concerns around the safety of vaccination – in 2016 the Vaccine Confidence Project found that the European region was the most sceptical in the world on vaccine safety,” she said.

“Vaccines work. If measles is to be eliminated, we must continue to further our understanding of the underlying reasons for non-vaccination and to address them with effective evidence-based interventions.”

The report says Ramsay urged people who might not have been immunised to see their doctor. “Anyone who missed out on their MMR vaccine in the past or are unsure if they had two doses should contact their GP practice to catch-up. We would encourage people to ensure they are up to date with their MMR vaccine before travelling to countries with ongoing measles outbreaks, heading to large gatherings such as festivals, or before starting university,” she said.

In the early 2000s, after the supposed link between the MMR vaccine and autism was thoroughly debunked, healthcare professionals, including GPs and our teams, worked hard to re-establish public confidence in vaccinations. Helen Stokes-Lampard, chair of the Royal College of GPs writes in The Guardian that it took years to restore, but she says, “uptake rates in children receiving the MMR vaccine began to improve and there was a time, not so long ago, when we thought we had eradicated measles entirely.”

Stokes-Lampard writes: “That is why recent data about the surge in measles cases across Europe will come as distressing news – even to us here in the UK. However, it backs up concerns that were published last month in the British Journal of General Practice.

“The rapid spread of measles across Europe is an inevitable consequence of lower uptakes of the MMR vaccine globally, and the particularly virulent nature of this disease and how easily it can spread. It has put the UK on high alert and prompted warnings about the risk of measles spreading here, but it has also put the need for a strong, consistent vaccination campaign high on the political agenda.

“Vaccination is one of the great successes of modern medicine so it is tragic that a decade after the MMR scandal was thoroughly exposed, we are still suffering from the setbacks of the 1990s. While uptake rates of the vaccine are high in the UK, this year’s outbreak of more than 800 confirmed measles cases in England shows that we are still in dangerous territory. Many of the cases reported will be a direct result of susceptible teenagers and young adults who missed their MMR vaccine as children. Another reason for the outbreak is people travelling in and out of Europe, and mixing with groups of people with low rates of vaccination.

“As a society, we have collectively failed to adequately tackle the strong anti-vaccination movement which continues to influence some parents.

“In general practice, we have been working to reassure worried parents on a one-to-one basis that the vaccine is safe for their children, and while we are very pleased with the trust parents have shown in it so far, it is clear that the message is still not getting through universally. False information about MMR continues to be spread online, particularly on social media, giving a platform to the anti-vaccination movement to push erroneous claims.

“Some of the posts have hundreds of thousands of “likes” and include false claims that healthcare professionals have been lying to the public or that immunisation injections amount to nothing more than “poison being pumped into people’s bloodstreams”.

“A lack of regulation and enforcement around this material online has allowed these groups to build momentum without the opportunity for any form of meaningful evidence-based rebuttal.

“Tackling public misinformation about vaccines is crucial to the future success of any campaign. We need to counter this with the message that vaccinations are safe, effective and essential to safeguarding our health and that of our children. Getting the public invested in the benefits of vaccination is key to its success and this must be tackled with a society-wide approach.

“People develop life-changing complications from measles. People die from this entirely preventable infection. That is a tragedy that must be prevented. Any death from measles is one life too much. Vaccinations take only a moment but they can protect for life.”