Major bleeding risk with warfarin and aspirin together 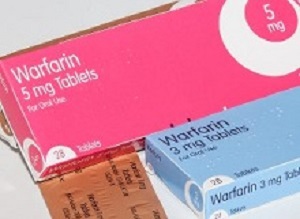 A daily aspirin is a commonly used, generally safe therapy for people who need help preventing heart attacks or stroke. But Michigan Medicine research finds more reason to reconsider aspirin use when a patient is also taking an anticoagulant.

The study reveals a significant increase in adverse outcomes for people taking both aspirin and warfarin, a long-popular anticoagulant often prescribed for stroke prevention in patients with atrial fibrillation and venous thromboembolic disease. Both groups of people need to avoid developing blood clots that could lead to stroke or pulmonary embolism.

"Nearly 2,500 patients who were prescribed warfarin were taking aspirin without any clear reason, over a seven-year period," says senior author Dr Geoffrey Barnes, a vascular cardiologist at the University of Michigan Frankel Cardiovascular Centre and an assistant professor of internal medicine at the U-M Medical School. "No doctors really own the prescribing of aspirin, so it's possible it got overlooked."

Some patients could have been taking aspirin already when they began anti-coagulation with warfarin for a new issue like Afib or VTE, and they didn't stop the aspirin. Others may have started aspirin for other reasons while already taking warfarin, which is easy to do because it's over the counter, researchers say.

In this study, 5.7% of those using combination therapy experienced major bleeding events after one year, compared to 3.3% of those on warfarin only. The combination group that was using aspirin without a clear indication also visited the emergency department and/or were hospitalised for bleeding significantly more often.

Yet, there wasn't a difference in stroke or heart attack outcomes that are typical uses for aspirin, Barnes says. The mortality rates at one year were similar between both groups, and 2.3% of those on both medications had a thrombotic event at one year compared to 2.7% of those on warfarin alone. The study cohort included 6,539 patients who were enrolled at six anti-coagulation clinics in Michigan between 2010 and 2017.

"Clinicians should ask their patients who are anti-coagulated with warfarin if they're taking aspirin as well," says first author Dr Jordan Schaefer, a haematologist at Michigan Medicine and assistant professor of internal medicine. "For the patients who are on both therapies, clinicians should review their medical history to determine if it's really necessary to be on both drugs."

Although 37.5% of the patients in this study were receiving combination warfarin and aspirin therapy without a clear indication, the combination does make sense for a small number of people. Barnes says patients who may need to be on both medications include those who have had a recent heart attack, recent coronary stent placement or bypass surgery, prior mechanical valve surgery, or known peripheral artery disease.

It's the latest research on the risks of improper anticoagulant use from Barnes, who recently published findings on the use of multiple blood thinners and risk of gastrointestinal bleeding. That Vascular Medicine study, with U-M gastroenterologist Dr Jacob Kurlander found more than one-third of patients in a large study could benefit from either stopping one of their multiple blood thinners, or adding another medication (a proton pump inhibitor like Prilosec) to suppress acid production in the stomach and reduce the risk of dangerous GI bleeding.

Based on these findings, researchers are leading the charge for change in Michigan. They're working with anticoagulation clinics to help identify people who are using multiple blood thinners, and then determine if both are truly necessary, or if aspirin should be stopped.

"There's been some hint of this being an issue for a long time," Schaefer says. "Now based on these new findings, we're working to reduce the number of patients on aspirin without a clear reason for both drugs."

"We think this is an important area to address, and we're trying to make a change at the system level," says Barnes, a member of U-M's Institute for Healthcare Policy & Innovation.

Abstract
Importance: It is not clear how often patients receive aspirin (acetylsalicylic acid) while receiving oral anticoagulation with warfarin sodium without a clear therapeutic indication for aspirin, such as a mechanical heart valve replacement, recent percutaneous coronary intervention, or acute coronary syndrome. The clinical outcomes of such patients treated with warfarin and aspirin therapy compared with warfarin monotherapy are not well defined to date.
Objective: To evaluate the frequency and outcomes of adding aspirin to warfarin for patients without a clear therapeutic indication for combination therapy.
Design, Setting, and Participants: A registry-based cohort study of adults enrolled at 6 anticoagulation clinics in Michigan (January 1, 2010, to December 31, 2017) who were receiving warfarin therapy for atrial fibrillation or venous thromboembolism without documentation of a recent myocardial infarction or history of valve replacement.
Exposure: Aspirin use without therapeutic indication.
Main Outcomes and Measures: Rates of any bleeding, major bleeding events, emergency department visits, hospitalizations, and thrombotic events at 1, 2, and 3 years.
Results: Of the study cohort of 6539 patients (3326 men [50.9%]; mean [SD] age, 66.1 [15.5] years), 2453 patients (37.5%) without a clear therapeutic indication for aspirin were receiving combination warfarin and aspirin therapy. Data from 2 propensity score–matched cohorts of 1844 patients were analyzed (warfarin and aspirin vs warfarin only). At 1 year, patients receiving combination warfarin and aspirin compared with those receiving warfarin only had higher rates of overall bleeding (cumulative incidence, 26.0%; 95% CI, 23.8%-28.3% vs 20.3%; 95% CI, 18.3%-22.3%; P < .001), major bleeding (5.7%; 95% CI, 4.6%-7.1% vs 3.3%; 95% CI, 2.4%-4.3%; P < .001), emergency department visits for bleeding (13.3%; 95% CI, 11.6%-15.1% vs 9.8%; 95% CI, 8.4%-11.4%; P = .001), and hospitalizations for bleeding (8.1%; 6.8%-9.6% vs 5.2%; 4.1%-6.4%; P = .001). Rates of thrombosis were similar, with a 1-year cumulative incidence of 2.3% (95% CI, 1.6%-3.1%) for those receiving combination warfarin and aspirin therapy compared with 2.7% (95% CI, 2.0%-3.6%) for those receiving warfarin alone (P = .40). Similar findings persisted during 3 years of follow-up as well as in sensitivity analyses.
Conclusions and Relevance: Compared with warfarin monotherapy, receipt of combination warfarin and aspirin therapy was associated with increased bleeding and similar observed rates of thrombosis. Further research is needed to better stratify which patients may benefit from aspirin while anticoagulated with warfarin for atrial fibrillation or venous thromboembolism; clinicians should be judicious in selecting patients for combination therapy.