Myth of 'tongue swallowing' is costing lives of athletes through SCA 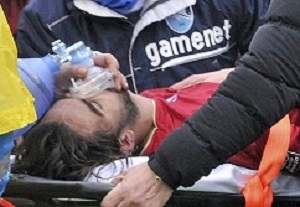 About 3m people have viewed the YouTube video of the death of US collegiate basketball player Frank Gathers from cardiac arrest during a game in 1990. The sequence of the events clearly shows the that for two entire minutes following his collapse, he received no form of cardiopulmonary resuscitation (CPR).

New research suggests that the main obstacle to an appropriate bystander response during athletes' cardiac arrest could be an apparently widespread myth: that "tongue swallowing" is a common complication of sudden loss of consciousness that must be avoided or relieved at all costs to prevent death from asphyxia.

"As of February 2017, the 'Hands-Only CPR Demo Video' by the American Heart Association (AHA) and the 'Learn Hands-Only CPR' from the American Red Cross had 337,104 and 227,032 views, respectively. These figures shrivel next to the staggering number of views of the videos showing Gathers, who died of cardiac arrest while an entire jam-packed basketball stadium crowd watched in disbelief, without anybody providing any form of appropriate CPR," comments lead investigator Dr Dana Viskin, from the Tel Aviv Sourasky Medical Centre and Sackler School of Medicine, Tel Aviv University, Israel.

To determine whether inadequate responses by fellow team members may well be an unappreciated serious obstacle to successful resuscitation of athletes collapsing with cardiac arrest during competition, investigators reviewed 29 available videos from 1990-2017 of sudden circulatory arrest (SCA), or loss of consciousness. The rescue process of each collapsed player was analysed with careful attention paid to the first action performed by the first to arrive on the scene.

In videos in which the initial intervention was visible, 65% showed actions to prevent tongue swallowing, which included placing the player on his side or tilting his head sideways, and forcefully opening the athlete's mouth placing the rescuer's fingers in the victim's mouth, sometimes with a visible pull at the tongue. Only 38% show chest compressions. Further, a defibrillator was brought to the scene in only two cases, and in one of those, the first shock was not delivered until 10 minutes later. Of the players presenting with cardiac arrest, 36% survived.

According to Viskin, "The cardiac arrest events of athletes caught on video and available on the internet portray a very disturbing picture of fellow teammates responding to cardiac arrest incorrectly. Prevention and/or 'relief' of tongue swallowing' appears to take priority over chest compression in the majority of video-documented events."

This misplaced priority has also been encouraged by inaccurate reporting by various media, such as a BBC Sports internet article commending inappropriate resuscitation attempts by teammates and medical staff to prevent the athlete from swallowing his tongue as he lost consciousness.

In an accompanying editorial, Dr Peter J Kudenchuk, of the division of cardiology/arrhythmia services, University of Washington – Seattle emphasises that the initial moments following collapse are arguably the most critical, since all successive emergency actions depend on SCA first being quickly recognized and properly treated. "It is during this time period when the battle for survival can all too easily be lost, particularly if SCA is mistaken for something less immediately life-threatening, therapies are misdirected, or not given at all."

In the past, the traditional approach to resuscitation relied on ABC, or Airway, Breathing and Chest compressions. Although this guideline was revised by the AHA in 2010 to CAB (Chest Compressions, Airway, Breathing), the old technique may still be holding sway.

Kudenchuk notes that the newer guidelines assume that all collapses are due to SCA, and require only two questions to be answered: "Is the patient conscious?" and "Are they breathing normally?" Two "No" answers trigger immediate chest compressions. This "No, No, GO!" algorithm is proving to increase survival where it is being used.

This lag in understanding is of great concern. Viskin adds, "Since we began our research regarding this topic, at least three more cases had been added to our statistics, including a very recent one, not included in this present study, involving a soccer player in The Netherlands. It is interesting since the world seems to be moving forward in regard to technology, medical equipment, and research, but in a field with media exposure to millions of people worldwide, we seem to be over a decade behind."

While this study focuses on how tragic cardiac arrest might be when it strikes an athlete, Kudenchuk emphasises that it also typifies the bystander inaction that occurs in hundreds of thousands of instances of others who fall victim to out-of-hospital cardiac arrest each year across the globe.