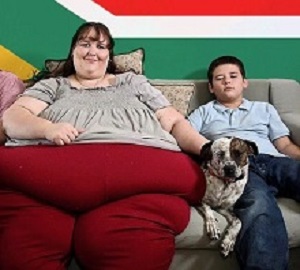 The number of young South Africans suffering from obesity doubled in six years while this took 13 years to happen in the US, reports The Times. Local researchers from the University of KwaZulu-Natal (UKZN)‚ University of the Witwatersrand (Wits)‚ and international researchers from Denmark and England analysed the body mass index (BMI) of South African children‚ adolescents and young adults from 2008 to 2015. Your BMI is calculated by dividing your weight by your height and then dividing the answer by your height again.

The study analysed the mean BMI of 28‚247 people from 7‚301 households by age and year. The analysis did not include children under the age of five years. Researchers found there was a greater increase of obesity in low- and middle-income countries (LMIC) compared to global trends. “South Africa is undergoing rapid socioeconomic and demographic changes that have triggered a rapid nutrition transition.”

There was also a rapid rise in the BMI of people between the ages of six and 25 years‚ especially among women in urban areas of middle-high socioeconomic groups. The largest gains were in KwaZulu-Natal‚ Free State‚ North West and Limpopo.

This can be attributed to growth in gross domestic product (GDP)‚ more disposable income‚ increased exposure to globalisation and the establishment of large urban informal settlements. This has driven changes in dietary patterns to cheap energy-dense foodstuffs‚ people drinking more sugary drinks and increased consumption of saturated fats and animal proteins.

Researchers said in the report that if lower- and middle-income countries continue to expand faster than the global pattern it affects the development of the country and overtaxes the national health care budget. The indirect costs will be a burden on households due to lost wages.

“Overweight/obesity is also likely to reduce the productive life of working individuals and negatively impact on local GDP through absenteeism.”

According to the researchers there is a 70% chance of an overweight child remaining overweight as an adult. The risk of childhood obesity includes diabetes‚ hypertension‚ cardiovascular and kidney diseases.

Abstract
Background: There is a global epidemic of overweight and obesity; however, this rate of increase is even greater in some low- and middle-income countries (LMIC). South Africa (SA) is undergoing rapid socioeconomic and demographic changes that have triggered a rapid nutrition transition. The paper focuses on the recent rate of change of body mass index (BMI) among children, adolescents and young adults, further stratified by key sociodemographic factors.
Methods: We analysed mean BMI of 28 247 individuals (including children) from 7301 households by age and year, from anthropometric data from four national cross-sectional (repeated panel) surveys using non-linear fitted curves and associated 95% confidence intervals.
Results: From 2008 to 2015, there was rapid rise in mean BMI in the 6–25 age band, with the highest risk (3–4+ BMI unit increase) among children aged 8–10 years. The increase was largely among females in urban areas and of middle-high socioeconomic standing. Prominent gains were also observed in certain rural areas, with extensive geographical heterogeneity across the country.
Conclusions: We have demonstrated a major deviation from the current understanding of patterns of BMI increase, with a rate of increase substantially greater in the developing world context compared with the global pattern. This population-wide effect will have major consequences for national development as the epidemic of related non-communicable disease unfolds, and will overtax the national health care budget. Our refined understanding highlights that risks are further compounded for certain groups/places, and emphasizes that urgent geographical and population-targeted interventions are necessary. These interventions could include a sugar tax, clearer food labelling, revised school feeding programmes and mandatory bans on unhealthy food marketing to children.The scenario unfolding in South Africa will likely be followed in other LMICs.