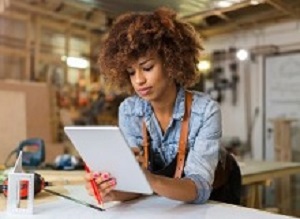 The minimum amount of paid employment needed to deliver the well-being and mental health benefits that employment has been shown to bring may be as little as eight-hours a week, according to research at the universities of Cambridge and Salford.

As automation advances, predictions of a jobless future have some fearing unrest from mass unemployment, while others imagine a more contented work-free society. Aside from economic factors, paid employment brings other benefits – often psychological – such as self-esteem and social inclusion. Now, researchers at the universities of Cambridge and Salford have set out to define a recommended "dosage" of work for optimal wellbeing.

They examined how changes in working hours were linked to mental health and life satisfaction in over 70,000 UK residents between 2009 and 2018*.

The study shows that when people moved from unemployment or stay-at-home parenting into paid work of eight hours or less a week, their risk of mental health problems reduced by an average of 30%. Yet researchers found no evidence that working any more than eight hours provided further boosts to wellbeing. The full-time standard of 37 to 40 hours was not significantly different to any other working time category when it came to mental health.

As such, they suggest that to get the mental wellbeing benefits of paid work, the most "effective dose" is only around one day a week – as anything more makes little difference.

"We have effective dosage guides for everything from Vitamin C to hours of sleep in order to help us feel better, but this is the first time the question has been asked of paid work," said study co-author Dr Brendan Burchell, a sociologist from Cambridge University who leads the Employment Dosage research project.

"We know unemployment is often detrimental to people's wellbeing, negatively affecting identity, status, time use, and sense of collective purpose. We now have some idea of just how much paid work is needed to get the psycho-social benefits of employment – and it's not that much at all."

Supporting the unemployed in a future with limited work is the subject of much policy discussion (universal basic income). However, researchers argue that employment should be retained across adult populations, but working weeks dramatically reduced for work to be redistributed.

"In the next few decades we could see artificial intelligence, big data and robotics replace much of the paid work currently done by humans," said Dr Daiga Kamerde, study first author from Salford University and employment dosage researcher. "If there is not enough for everybody who wants to work full-time, we will have to rethink current norms. This should include the redistribution of working hours, so everyone can get the mental health benefits of a job, even if that means we all work much shorter weeks."

"Our findings are an important step in thinking what the minimum amount of paid work people might need in a future with little work to go round," she said.

The study used data from the UK Household Longitudinal Study to track the wellbeing of 71,113 individuals between the ages of 16 and 64 as they changed working hours over the nine-year period. People were asked about issues such as anxiety and sleep problems to gauge mental health.

Researchers also found that self-reported life satisfaction in men increased by around 30% with up to eight hours of paid work, although women didn't see a similar jump until working 20 hours.

The team offer creative policy options for moving into a future with limited work, including "five-day weekends," working just a couple of hours a day, or increasing annual holiday from weeks to months – even having two months off for every month at work.

They also argue that working hour reduction and redistribution could improve work-life balance, increase productivity, and cut down CO2 emissions from commuting. However, they point out that reduction of hours would need to be for everyone, to avoid increasing socioeconomic inequalities.

"The traditional model, in which everyone works around 40 hours a week, was never based on how much work was good for people. Our research suggests that micro-jobs provide the same psychological benefits as full-time jobs," said co-author and Cambridge sociologist Senhu Wang.

"However, the quality of work will always be crucial. Jobs where employees are disrespected or subject to insecure or zero-hours contracts do not provide the same benefits to wellbeing, nor are they likely to in the future."

Burchell added: "If the UK were to plough annual productivity gains into reduced working hours rather than pay rises, the normal working week could be four days within a decade."

Abstract
There are predictions that in future rapid technological development could result in a significant shortage of paid work. A possible option currently debated by academics, policy makers, trade unions, employers and mass media, is a shorter working week for everyone. In this context, two important research questions that have not been asked so far are: what is the minimum amount of paid employment needed to deliver some or all of the well-being and mental health benefits that employment has been shown to bring? And what is the optimum number of working hours at which the mental health of workers is at its highest? To answer these questions, this study used the UK Household Longitudinal Study (2009–2018) data from individuals aged between 16 and 64. The analytical sample was 156,734 person-wave observations from 84,993 unique persons of whom 71,113 had two or more measurement times. Fixed effects regressions were applied to examine how changes in work hours were linked to changes in mental well-being within each individual over time. This study found that even a small number of working hours (between one and 8 h a week) generates significant mental health and well-being benefits for previously unemployed or economically inactive individuals. The findings suggest there is no single optimum number of working hours at which well-being and mental health are at their highest – for most groups of workers there was little variation in wellbeing between the lowest (1–8 h) through to the highest (44–48 h) category of working hours. These findings provide important and timely empirical evidence for future of work planning, shorter working week policies and have implications for theorising the future models of organising work in society.