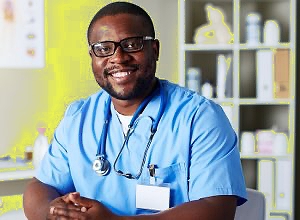 Despite international interventions to staunch Africa's long existing medical brain drain, the key issue is that the continent’s leaders will have to exercise strong political to make the continent's health sector attractive to its trained professionals, writes journalist Olusegun Akinfenwa.

Africa’s medical brain drain by developed countries is a perennial issue that has affected the continent’s health care for decades. The COVID-19 pandemic has further exacerbated the problem as more African-trained physicians and other health workers are lured by western countries, including the UK and the US.

Ideally, every society should have a minimum of one doctor per 1,000 persons, but in Africa, the ratio is as low as one to 5,000. And going by its population growth rate, by 2035, Africa will have a deficit of 4.3 million physicians, representing 34% of the global total shortage.

Despite this, many developed countries with relatively high doctor-to-population ratio recruit a high number of African-trained professionals into their health workforce on a regular basis.

For example, the United Kingdom has 370,000 doctors catering for its 68.2 million population representing 2.8 doctors per 1,000 persons. Nigeria, on the other hand, has fewer than 75,000 doctors for its more than 211 million population, representing 0.38 doctor per 1,000 people. Yet a 2018 report by the International Centre for Investigative Reporting (ICIR) revealed that the UK employs at least 12 Nigerian physicians weekly.

Back in 2006, there were only 2,692 Nigerian doctors in the UK. But by 2018, the number had increased to 5,250, the ICIR report shows. Africa's medical brain drain by the UK dates back many years. A 2008 Lancet report reveals that almost one in 10 doctors in the UK medical workforce was from sub-Saharan Africa.

Other medical occupational groups in the US also account for a high number of Africans. As of May 2020, 16% of personal care aides, 20% of nursing assistants, and 24% of registered nurses, were from Africa.

Canada is another country benefitting massively from the medical brain drain. A 2019 report showed that 22% of doctors in the country were foreign-trained, and many of them came from Africa. Australia, UAE, and Saudi Arabia are some other countries sustaining their relatively high doctor-to-population ratio with medical graduates from Africa.

Why the brain drain?
Multiple factors are said to be responsible for the brain drain. Some of the leading factors are remuneration and a better working environment. “I left Nigeria because I wanted to earn more money, learn new things, and to practise in a better environment,” a Nigerian physician working in the US said in a 2016 interview with Africa Renewal. Other driving factors include poor infrastructure, dearth of job opportunities, fear of a bleak future for their children.

For decades, the health sectors in most African countries have suffered huge funding gaps and other forms of negligence. The continent has 16% of the global population but spends less than 1% of the overall global health funding. A Brookings report shows that on a per capita basis, the rest of the world spends 10 times more on medical care than Africa.

The acute financing gap leaves many health facilities with poor, outdated equipment, and is responsible for the poor health worker salaries compared with their counterparts abroad.

On average, surgeons in Germany earn $122,400 annually compared with their counterparts in Zambia who earn $24,000. A specialist’s average annual pay in the US is $370,000 while his counterpart in Botswana earns $18,216. In Guinea Bissau, some doctors earn as little as $320 monthly.

In the area of healthcare infrastructure, most African countries, especially the sub-Saharan region, lag far behind the rest of the world. The most recent data captured by the World Bank shows that the region has only 0.2 hospital beds per 1,000 people. Countries like the Central African Republic and Eritrea have 0.1 per 1,000 people.

During the 2020 COVID-19 pandemic, a huge shortage of ventilators and other medical equipment was reported in most African countries, leading to the heightened challenges faced by frontline health workers. The huge disparity explains why most African countries have been hit badly by brain drain. Doctors’ high-value occupational status makes them attractive to many developed countries.

Many of them are on permanent resident statuses in those countries, such as the Indefinite Leave to Remain in the UK and the Employment-Based Green Card in the US.

The high migration depends on the continent's health indicators and economy. Africa grapples with high child and maternal mortality rates and other challenges. Compared with Europe, the under-five mortality rate in Africa is about eight times higher. Deaths from preventable diseases are also on the high side. For instance, in 2019, Africa accounted for 94% of all global malaria deaths.

Half of the overall deaths were recorded in just six countries, namely Nigeria, DRC, Tanzania, Burkina Faso, Mozambique, and Niger. Unfortunately, the continuous brain drain leaves the masses with fewer medical staff to attend to their health needs.

Economic-wise, the continent has lost billions of dollars to those developed countries to which its trained professionals migrate in droves. A 2011 study by a team of Canadian researchers showed that governments in nine sub-Saharan African countries spent between $21,000 and $58,700 to subsidise a physician’s education. This amounts to a huge financial loss in investment as they lose thousands of doctors to other countries. The report showed the UK as the biggest beneficiary with $2.7 billion, followed by the US with $846 million.

To address the challenges associated with medical brain drain, the World Health Assembly came up with a code of practice that recommends that developed economies should render financial assistance to source countries experiencing a shortage of medical professionals.

That same year, the US invested $130 million through its Medical Education Partnership Initiative to support 12 sub-Saharan African medical schools.

The code also proposed other recommendations aimed at stemming the flow of the high talent migration. However, the current reality shows that the long-existing Africa's medical brain drain is far from over. African leaders will have to demonstrate the strong political will needed to make the continent's health sector attractive to its trained professionals.

With a competitive remuneration package and working conditions, there will be less desire for intercontinental migration by African health care workers.

Olusegun Akinfenwa writes for Immigration Advice Service, an immigration law firm based in the UK and operating globally.

Brickbats and bouquets for NHI and Medical Schemes Bills