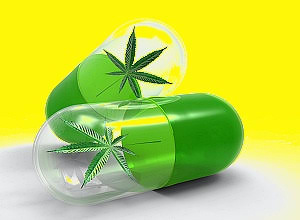 Doctors are slowly enrolling patients in France's first experiment with medical cannabis, three months after it began, writes Sarah Elzas for Radio France International. Many are eager to access the drug to address a range of disorders, including chronic pain, but participation in the experiment is onerous – and chances of success, for most, are slim.

“Patients are really eager to get these products. They know they are available in other countries and some of them have been abroad to get them,” says neurologist Didier Bouhassira.

He is a pain specialist at one of France’s largest pain centres at the Ambroise Pare hospital in Boulogne, west of Paris, and is involved in an experiment that is testing out the prescription and distribution of medical cannabis in France.

Though rules are changing, and CBD, one of the components of cannabis, is becoming increasingly available in France, THC, the main psychoactive element of the plant, remains illegal, and consuming marijuana is an offence.

“Many patients are asking for cannabis. They are impatient for this experiment,” says Bouhassira. “But unfortunately very few are going to be involved.”

The two-year experiment will involve 3,000 people – 700 of whom suffer from chronic pain. Only three or four of Bouhassira’s patients will be involved, which means he has had to make difficult decisions, writes RFI in the report published on 12 June 2021.

To take part in the experiment, patients must suffer from severe, neuropathic pain that does not respond to other drugs.

“Many neurological diseases are associated with very severe neuropathic pain,” Bouhassira explains. “Even opioids do not work very well in these patients. So we use antidepressants, or anticonvulsants, which usually have nothing to do with pain.”

A few dozen of his patients qualify for the experiment but the requirements are onerous enough that only a handful will actually sign up.

“When you participate in this experimentation, you cannot drive, so that’s an exclusion criteria,” he says, adding that participation is not easy, with monthly appointments and a lot of paperwork.

“When we explain all the constraints, many of them decline, because it’s too complicated.”

Johanne Seneco was eager to take part. Bouhassira had her come from her home in Amiens to enrol, according to RFI. She arrives in the office with her husband, walking with a cane.

“I feel like I’m on fire, I feel burning from my head to my feet, constantly,” she says, her face pinched behind a surgical mask.

Seneco has been seeing Bouhassira for pain management since 2015, after a botched knee operation the year before severed nerves and left her with severe pain in her leg that has since spread across her whole body, triggering a disorder called complex regional pain syndrome.

She is in constant, severe pain, 24 hours a day. She cannot move well on her own and cannot work. She had to leave her job as an assistant in a middle school, and she spends most of her days in bed propped up with pillows.

“I’ve lost everything,” she says, her eyes welling up. “The hardest thing is the impact it has had on my daughter. She is 18 now, but for the last seven years she has not had a mother.”

Bouhassira has Seneco fill out forms and questionnaires asking about her pain levels and her state of mind. She will have to fill these out at monthly doctor’s visits throughout the two-year experiment.

This is work she does not mind doing, if it allows her to access something that might help ease her pain. She has tried many medications, and treatments like hypnosis and acupuncture, none of which have worked. Some have made the pain worse.

The RFI story continues: Unlike many who suffer chronic pain, Seneco has never tried cannabis.

“Doctors have told me to smoke a joint,” she says. “But I never dared because I was worried about what else could be in it.”

Many of Bouhassira’s other patients are not as hesitant.

“We discuss it openly with them, and we ask if they have tried smoking or taking it in other forms,” he explains. “It’s important for us to know.”

If cannabis works, Bouhassira does not discourage them from continuing, though he warns of the risk of using products that are unregulated.

“The problem is that there are no controls on these products that they buy online or off the street,” he says.

After a half hour of paperwork, Bouhassira finally presents Seneco with what she came for: the prescription for sublingual drops of cannabis oil, with an equal amount of CBD and THC.

The prescription takes up an entire page, because she is to start with a small amount and increase every few days until she either feels her pain diminish, or has a negative effect.

“You will increase very progressively, depending on the effects,” Bouhassira explains. “There is no fixed dose. We adjust for each patient.”

Prescription in hand, Seneco then makes her way down to the pharmacy in the hospitals' basement, where a pharmacist spends a half hour going over the prescription.

The experiment is not a drug trial but a test of the logistics of prescribing and distributing cannabis, and family doctors and pharmacists are being trained to do it.

“I was interested because I’m concerned about everything having to do with pain,” explains a pharmacist in the south-west who went through the training, but who did not want to be identified, as cannabis is still a delicate subject in France. “I want to facilitate an efficient treatment for pain.”

“It was to help us be comfortable with what is on the prescription,” she says, though she has yet put it into practice, with few patients enrolled in the experiment, which has been slowed down by COVID.

“The role of a pharmacist is to give the right medicine, with the right dosage and the right information to support them,” she continues. “This is about supporting people.”

This experiment is “rather unique” for a medication in France, says Nicolas Authier, a doctor and pharmacologist, and president of the scientific committee on medicinal cannabis.

Such an experiment is necessary, because of the legal status of cannabis, which continues to have strong opponents in the government, even as a growing majority of French people support its legalisation.

The experiment is a step towards pushing the issue forward.

"It is likely that it will be difficult to say no at the end," says Authier. "Once you start the experiment, it's usually to take the time to organise what comes next, and rarely to stop everything afterwards."

Seneco leaves the hospital pharmacy with a paper bag containing a small bottle of cannabis oil, made by the Israeli company Panaxia. It is enough for a month, until she returns for her next appointment with the doctor for a new prescription.

She is eager to get home and start the treatment, says RFI.

“What I am looking for is relief, because I have no more life,” she says. “I don’t expect to get to zero pain. But if I can reduce it by half, that would be wonderful.”

“It’s not a magic bullet,” says Bouhassira, who warns patients that cannabis may not work. "Usually it provides partial relief."

Authier says cannabis will not work on most of the patients enrolled in the experiment, and it is unclear for whom it will work: “For now, international research has not been able to say which profile of patient is most likely to respond to these medications.”

But some will have a good response, with “a clear improvement of their quality of life".

"That’s already something. We will have done our work as doctor," he says.

READ MORE FROM THE MEDICALBRIEF ARCHIVES

Cannabis use and impact on rheumatologic pain – French study