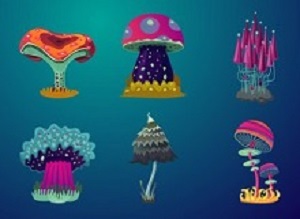 Dr Johnson is a leading expert on the effects of psychedelics and is part of the Johns Hopkins Psychedelic Research Unit in Baltimore.

Johns Hopkins researchers have FDA approval to study the effects of psilocybin, by giving it to volunteers in a clinical setting. Psilocybin mushrooms are currently illegal in the US and are considered a Schedule I Controlled Substance.

During their research, volunteers (who are extensively screened) take a pill of synthesized psilocybin, they put on an eye mask so they can't see, and they listen to peaceful music to help them internalize the psychedelic experience.

Dr Johnson said after 15 years of studies, they've found (in general terms) psilocybin to be beneficial for people who are stuck in a way of thinking or behaving. "Whether it's using a particular drug – like cigarettes or alcohol – or whether it's being stuck on a way of thinking about oneself like, 'I'm a failure, I'm never gonna make it, no one likes me – like in depression," Dr Johnson said.

The psilocybin sessions seem to shake people out of their mental or behavioral cycles. The effects are not just for the five or so hours that volunteers are on the drug, Dr Johnson said they've found some results can be lasting.

On the Johns Hopkins Psychedelic Research Unit's website, it has a list of its notable achievements, including the fact that Johns Hopkins was the first to research psilocybin since the 1970s. A 2006 research report stated that: "Psilocybin led to profound experiences that 67 percent of participants rated as among the top 5 most meaningful experiences of their lifetime. The single psilocybin session led to positive changes in moods, attitudes, and behavior for 14 months (and possibly longer), with 64 percent indicating the experience increased well-being or life-satisfaction."

Regarding addiction, the Johns Hopkins team researched Psychedelic Assisted Smoking Cessation. The results showed, "that 80% of participants were biologically verified as smoke free six months after psilocybin treatment. These are drastically higher than typical success rates, with the most effective medications showing success rates less than 35 percent."

Also listed under "Notable Achievements" on its website, was a study involving cancer patients, titled, "Palliative Effects of Psilocybin Treatment in Cancer Patients . . . demonstrating that a single administration of psilocybin produces large and sustained decreases in depression and anxiety in patients with a life-threatening cancer diagnosis."

So what's happening in the brain when a person takes psilocybin? That answer is complex and there are a variety of factors: Dr Johnson said psilocybin activates a certain serotonin receptor called 5-HT2a, it also helps the brain better communicate with itself.

"So this isn't about what area of the brain is active or not, this is more about the synchronization across brain areas, or how the different areas of the brain are communicating with each other essentially." Dr Johnson said.

Then there are the benefits of the actual internal psychedelic journey in a setting and dosage controlled by researchers. While each person's experience varies, psilocybin can force you to deal with your own drama, by letting you see your challenges in a different perspective. It can also make complex issues that you are facing seem smaller and simpler.

"The deeper ranges of experiences are contemplations about themselves, about their life history, about the important relationships in their life, their childhood," Dr Johnson said regarding what volunteers have shared about their revelations during psilocybin sessions.

"And then there are the truly big questions: the nature of reality, what life is about – these can be religious or non-religious in nature – what is the meaning of life? What am I doing in life?"

Researchers say psilocybin is not addictive, and they don't know of any long-term damage to the brain of a healthy participant, but they also warn it is still a drug that can be abused.

"These are powerful tools and they definitely come with risks," Dr Johnson said. "We're definitely not encouraging people to use on their own, but there's a lot of potential when, with the safe guards that are in place in a medical setting."

So what could this look like in the future? The long-term goal for these researchers is for psilocybin to be approved for medical use. In that case, it could be available in a clinic and treated like out-patient surgery: with preparation, monitoring, and follow-up care.

Psilocybin mushrooms are also making headlines in Denver, Colorado. In May, voters will decide if psilocybin will be decriminalized in the city. If approved, city resources would not be used to prosecute people who use or grow these psychedelic mushrooms for personal use.

In the meantime, psilocybin is helping researchers at Johns Hopkins better understand how the brain works.

* There is more information on Johns Hopkins University’s psilocybin research via this website: https://hopkinspsychedelic.org/index/#projects.