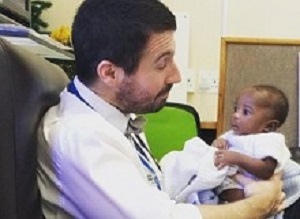 'How could anyone want to do your job?' These are words I hear frequently, from patients, from my friends, from strangers on the internet. And especially from my worried mother.

You see, I am a paediatric palliative physician. I spend a lot of my time with children, many of whom are terminally ill, and in varying degrees of pain and distress. I not only have to manage their medical symptoms through this incredibly difficult time, but provide support and comfort to their families and loved ones as well.

The truth is: dying children upset the limited sense of cosmic order many of us cling to. Kids are innocent, so they should not be punished – and certainly not with something as extreme as death. They are usually healthy, so they should pass away after their parents. They are happy, so they should not have to face extreme pain and suffering. And yet some of them are forced to. And although it may be shortened, they deserve a life that is as meaningful, pain-free, and dignified as possible. When death comes, it should be peaceful.

While paediatric training in South Africa is world-class, when it comes to palliative patients, many of us are left stumped. As healthcare providers, we are taught that children should always be saved; that no intervention is too painful or invasive if it will prolong life. Death is the enemy, to be fought vigorously and unceasingly. But what happens when, in our valiant efforts to keep the vital signs normal, to force air into an uncompliant chest, to squeeze another beat from a flagging heart, we end up doing more harm than good? When the final hours of a terminal patient’s life are spent not surrounded by love and affection in a calm environment, but alone, in a noisy ICU, with beeping monitors and busy staff members, have we really provided the appropriate send-off for a life well-lived?

In my final year of specialist training, I witnessed many children who were forced to endure unnecessary pain and suffering by well-meaning doctors at the end of their lives. There was a frantic desire to eke out more time. To do one more blood test. To correct one more correctable. To hold the spectre of death at bay. And when the dust had settled, and we were brutally honest with ourselves, we often discovered that this was often about our own needs, rather than the patients’: we wanted to be able to live with ourselves, to be able to go to sleep thinking everything that could possibly be done, had been done.

But in our desperation to assuage our consciences, we had forgotten a fundamental tenet of medicine: the patients come first.

This is not to say that we shouldn’t do everything to save children who can potentially recover – we absolutely should. Nor is this to impugn the motives of my colleagues: paediatricians are, quite frankly, some of the best people you will ever meet on this planet.

Rather, the above happens because we simply aren’t trained well about what to do when cure is no longer a possibility, and quality of life, rather than quantity, becomes paramount.

Palliative care aims to address this need. And I stumbled into it quite by accident. I was at a pretty low ebb over a patient who had spent three months in my ward, and was not improving. He was miserable; I was miserable. And he always felt sick from his treatment. Because he hated the 26 medications (and over 100 tablets) he had to take every day, I decided to slash all the non-essential ones and those with serious side-effects. After the cull, he was down to five. We also stopped hurting him by performing ‘routine’ blood tests, or regular suctioning of his throat (which he dreaded). We let him go outside, even if it was ‘dangerous’ because of his immunocompromised state from the chemotherapy.

Over the next few days, he perked up immeasurably. His wonderful smile returned. He began playing again. He started eating. His clinical condition improved! And the response from the specialists? “Given how much better he is, we’re back on track and we must immediately re-start all the cancelled medications!” I was aghast, and objected, but was ultimately overruled. He died, miserable, 2 weeks later while I looked helplessly on.

I thought I was going mad. Did no one else see what had happened? That when we focused on him, and not on our need to fix him, he improved? It was only when the palliative care team arrived, and explained that this scenario is depressingly common, and that I was, in fact, sane, that I realised there had to be a better way.

And so, much to my surprise, I found myself completing my palliative care diploma and joining the palliative care team (called ‘PaedsPal’) the following year. And it was here I realised that the ultimate kindness and respect one can show for a patient is care and understanding, especially when cure is no longer possible.

Palliative care is not about death, but about maximising life, especially when it is shortened. We like to be involved as early as possible in a patient’s management – even when there is still the possibility of a cure – and our services can be rendered in all settings (even the patients’ own homes). In that respect, there can be no more life-affirming job on planet earth.

Addressing a child with palliative care needs, and those of their family, requires more than just a single physician, which is why palliative care consists of an entire team. In Cape Town, we are fortunate to have ‘PaedsPal’, which is an NGO run under the auspices of Dr Michelle Meiring, an international authority on paediatric palliative care. The PaedsPal group consists of doctors, a nurse, a social worker, a counsellor, a massage therapist, and a music therapist. Although frequently overwhelmed, we aim to provide quality palliative care to children with life-threatening and life-limiting illnesses throughout the Cape Town area.

Amazingly, there are currently no paediatric hospices in Cape Town, which is very unfortunate, as these offer the ideal environment for managing terminally ill children in their final days. Hospitals are often an unsuitable environment for the reasons mentioned above, but in the absence of any alternatives, they are where most deaths occur.

For a number of reasons, paediatric palliative care is not something that many people regularly talk about, and when it does appear in the news, it’s often in a fairly negative light (witness the tragic case of Charlie Gard in the UK last year). Patients often view us as the harbingers of death, gleefully wielding our scythes as we switch off machines and yank out tubes.

Yet, fairly recently, a number of positive tweets I posted on the subject went viral, being read by over 15m people, and retweeted almost 100,000 times. They essentially recounted what children between the ages of four and nine, who were in their final days, valued most, and what gave their lives meaning.

The answers were as simple as they were profound: Less time on social media, less TV, less fretting about what others think. More time with family, more jokes, more books, more kindness, more sincerity… and more ice cream. Interestingly, the tweets themselves offer no major truths that most of us aren’t already aware of, but they show the kinder side of modern medicine in general, and palliative care in particular, which resonated with many. In addition, the poignancy of the comments being uttered by children facing death is what gives the messages weight and heft. There is a sense that in death, extraneous nonsense is stripped away, and a core of truth remains. And when this core is hopeful and uplifting, there will always be an audience.

What the popularity of the tweets also indicates is that there is a curiosity and a desire to explore this subject by the public. Because, as the old saying goes, the only certainties in life are death and taxes. We all have to pay the SA Revenue Service, and we are all going to die. Most of us sincerely hope that the process of dying will be pain-free, dignified and relatively swift, and that we will have sage ‘nuggets’ of wisdom to offer the next generation, but very few of us have any inkling of what this process is going to be like, and how we will handle it. And it’s just not a topic that comes up over the braai before the rugby. It’s especially not a topic that comes up when discussing our children.

In addition, the miraculous advances in modern medicine now mean that death can be deferred for much longer than it used to. But when the cost is prolonged suffering, is that necessarily a good thing? We all need to ask ourselves: at what point is ongoing active intervention, for the sake of it, worthwhile? This is not to say that we should simply throw our hands in the air and exclaim, ‘Oh well, there’s nothing more we can do.’ In palliative care, there is always something we can do to alleviate pain or symptoms, even when a cure is no longer realistic. Rather, it’s about shifting the focus of our care.

Children requiring palliative care are a uniquely vulnerable bunch, with grief-stricken and desperate parents who will (understandably) try anything. As a result, they are often exploited by quacks and snake-oil salesman, which is scandalous and infuriates me. People who exploit the sick and needy deserve nothing but contempt, and this column will be there to expose them.

“Digital Clubbing” was envisioned as a mechanism to take on the “bad guys”: those promoting dodgy diets, silly science, and dangerous quackery. There are no holy cows, and whether esteemed professors, or roadside hucksters, these folk will be dealt with fairly, but severely.

Often, however, the baddies retort, “We know what you stand against, but what do you stand for?” Well, we stand for these kids, and others who are vulnerable like them. I am honoured to be able to treat and learn from them.

So, in response to the original question, “How could anyone want to do your job?”, I reply, “It is a supreme privilege to be able to do my job. It inspires me every day. My sincere wish is that you find yours as fulfilling.”

Intermittent fasting: From Pythagoras to Fung