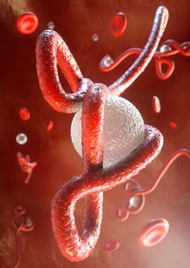 A research team led by University of California, Berkeley engineers has developed a new smartphone microscope that uses video to automatically detect and quantify infection by parasitic worms in a drop of blood. This next generation of UC Berkeley's CellScope technology could help revive efforts to eradicate debilitating filarial diseases in Africa by providing critical information to health providers in the field.

"We previously showed that mobile phones can be used for microscopy, but this is the first device that combines the imaging technology with hardware and software automation to create a complete diagnostic solution," said Daniel Fletcher, an associate chair and professor of bioengineering, whose UC Berkeley lab pioneered the CellScope. "The video CellScope provides accurate, fast results that enable health workers to make potentially life-saving treatment decisions in the field."

The UC Berkeley engineers teamed up with Dr Thomas Nutman from the National Institute of Allergy and Infectious Diseases (NIAID), and collaborators from Cameroon and France to develop the device. They conducted a pilot study in Cameroon, where health officials have been battling the parasitic worm diseases onchocerciasis (river blindness) and lymphatic filariasis.

The video CellScope, which uses motion instead of molecular markers or fluorescent stains to detect the movement of worms, was as accurate as conventional screening methods, the researchers found. "This research is addressing neglected tropical diseases," said Fletcher. "It demonstrates what technology can do to help fill a void for populations that are suffering from terrible, but treatable, diseases."

River blindness is transmitted through the bite of blackflies and is the second-leading cause of infectious blindness worldwide. Lymphatic filariasis, spread by mosquitoes, leads to elephantiasis, a condition marked by painful, disfiguring swelling. It is the second-leading cause of disability worldwide and, like river blindness, is highly endemic in certain regions in Africa.

The anti-parasitic drug ivermectin, or IVM, can be used to treat these diseases, but mass public health campaigns to administer the medication have been stalled because of potentially fatal side effects for patients co-infected with Loa loa, which causes loiasis, or African eye worm. When there are high circulating levels of microscopic Loa loaworms in a patient, treatment with IVM can potentially lead to severe or fatal brain or other neurologic damage.

The standard method of screening for levels of Loa loa involves trained technicians manually counting the worms in a blood smear using conventional laboratory microscopes, making the process impractical for use in field settings and in mass campaigns to administer IVM. The serious side effects of Loa loa and the difficulty of rapidly quantifying Loa levels in patients before treatment make it too risky to broadly administer IVM, representing a major setback in the efforts to eradicate river blindness and elephantiasis.

For this latest generation of the mobile phone microscope, named CellScope Loa, the researchers paired a smartphone with a 3D-printed plastic base where the sample of blood is positioned. The base included LED lights, microcontrollers, gears, circuitry and a USB port. Control of the device is automated through an app the researchers developed for this purpose. With a single touch of the screen by the healthcare worker, the phone communicates wirelessly via Bluetooth to controllers in the base to process and analyse the sample of blood. Gears move the sample in front of the camera, and an algorithm automatically analyses the telltale “wriggling” motion of the worms in video captured by the phone. The worm count is then displayed on the screen.

Fletcher said previous field tests revealed that automation helped reduce the rate of human error. The procedure takes about two minutes or less, starting from the time the sample is inserted to the display of the results. Pricking a finger and loading the blood onto the capillary adds another minute to the time. The short processing time allows health workers to quickly determine on site whether it is safe to administer IVM.

The researchers are now expanding the study of CellScope Loa to about 40,000 people in Cameroon.

And a revolutionary "smart" cane enabling the visually impaired to instantly identify friends and family could be available soon, thanks to students at Birmingham City University. The "XploR" mobility cane, being developed by ICT students Steve Adigbo, Waheed Rafiq and Richard Howlett, uses smartphone technology to recognise familiar faces from up to 10 metres away. The cane also features GPS functionality to aid navigation. Adigbo said: "… The smart cane incorporates facial recognition technology to alert the user when they are approaching a relative or friend. There's nothing else out there like this at the moment."

The Birmingham City University team have already presented the XploR cane to medical and science professionals in Luxembourg and France, and plan to visit organisations in Germany later this year. "Medical and healthcare companies in France really liked the product. Hopefully it'll be making a real difference to people’s lives soon," said Waheed.

The students have designed the XploR cane to detect faces up to 10 metres away, vibrating when detecting a recognisable individual from a bank of images stored on an internal SD memory card. The device will guide users towards friends and family members using an ear piece and audio guidance, with the information being relayed through Bluetooth technology.

The students conducted market research at the Beacon Centre for the Blind in Wolverhampton, West Midlands, to determine key features that the visually impaired would find useful in a mobility cane. "We found that high-spec technology features were essential requirements for users, as well as the cane needing to be fairly lightweight and easy to use," said Waheed. "We'll be returning to the Beacon Centre later this year for people to test the product and also to highlight the training and security features of the cane."

South Africa's Department of Health is launching a new cellphone app to take health messaging to the country's young people – and asking youth to help, reports Health-e. Health Minister Dr Aaron Motsoaledi announced the new application at the African regional consultation on the UN's new Global Strategy for Women's Children's and Adolescents' Health. Using the instant messaging application Mxit, the department will deliver health messaging to young people and allow them to participate in live chats with health professionals like gynaecologists, psychologists and even Motsoaledi.

Ahead of the application's June launch, Motsoaledi is asking young people between the ages of 10 and 24 years to submit short, catchy titles for the application. "I've decided that they, the youth of this country, must own this so they must give it a name," said Motsoaledi as he opened a call for names for the application. Names may be in any one of the 11 official languages but should be no more than six words. Young people can submit multiple entries and a 200-word motivation by 31 May by logging onto the mobi site yal.mobi. The winner will receive an electronic tablet, school bag and water bottle.