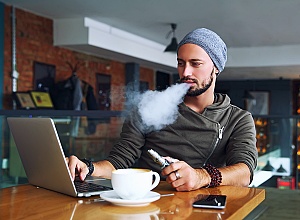 Yale University research published in the journal Addiction indicates that both cigarette and e-cigarette use decline under smoke-free workplace laws – but, interestingly, smoke-free laws’ effects were cut when vaping restrictions were added.

This Yale report on the research was published on 7 April 2021:

The observational study from researchers at the Yale School of Public Health suggests smoke-free worksite laws may yield reductions, not only in conventional cigarette use, but in the use of electronic nicotine delivery systems as well.

The researchers also found that adding vaping restrictions to these laws did not lead to further reductions in use of electronic nicotine delivery systems. Indeed, such restrictions appeared to reduce smoke-free worksite laws’ effects on conventional cigarette use.

By estimating effects on both smoking and vaping – an increasingly popular alternative to traditional cigarette smoking – this study’s findings clarify how clean air laws can be used to best promote population health.

Specifically, with 76% of the United States population covered by smoke-free worksite laws, evidence of ongoing benefits from these policies suggests nationwide adoption as a means to improve public health.

Studies have already shown that smoke-free air laws reduce smoking rates and increase quitting. However, much of that research was performed before e-cigarettes became easily accessible.

In their study, the YSPH research team noted that access to electronic nicotine delivery systems could have altered these policies’ effects, since smokers might switch to vaping in smoke-free areas and continue to smoke elsewhere.

Separate analyses considered current smoking and recent vaping among people aged 18 to 25 (as almost all smoking initiation occurs by age 25), and smoking cessation among those aged 26 to 54, excluding older respondents so that early tobacco-related deaths would not skew the data.

However, results also suggest that adding vape-free worksite restrictions may have muted the smoke-free law’s reduction in young adult smoking by over 50%.

A variety of mechanisms might explain the latter relationship; for example, restricting vaping to the same extent as smoking may reduce smokers’ incentives to switch, leading some would-be-vapers to continue smoking instead.

The study authors wrote that more research is needed to fully understand these restrictions’ effects.

“The bulk of current evidence finds that smoking cigarettes is likely to be far more harmful than vaping nicotine. To promote public health, policymakers need to understand how tobacco control laws affect both of these behaviours,” said YSPH Assistant Professor Abigail Friedman, who led the study. YSPH Professor Susan Busch co-authored the study.

Published in the journal Addiction on 10 February 2021.

In the United States, some states and localities have added vaping restrictions to established smoke‐free indoor air laws in order to reduce electronic cigarette use. Yet, if smokers use e‐cigarettes to quit, such restrictions could have the unintended effect of attenuating the original smoke‐free air policy’s effects on smoking.

Multivariable linear regressions estimated the association between increased exposure to smoke‐ and vape‐free worksite and restaurant laws and self‐reported current smoking and recent vaping among emerging adults (ages 18–25), as well as past‐12‐month smoking cessation among prime age adults (ages 26–54). All regressions adjusted for respondent sociodemographic and other tobacco control policies, along with state and year fixed effects.

From 2014 to 2018, increased adoption of smoke‐free worksite laws in the United States was associated with reductions in both current smoking and recent vaping, as well as increases in smoking cessation.

Adding vaping restrictions to smoke‐free worksite laws, however, was not associated with a reduction in recent vaping among emerging adults and may have attenuated the smoke‐free policy’s impact on current smoking in this age group.

WHO versus Public Health England over e-cigarettes

The health pros and cons of e-cigarettes – Evidence ambivalence