Soccer: Defenders and outfielders have up to 5x greater dementia risk 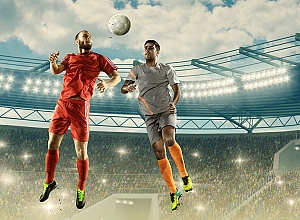 The position played and career length have been identified as particular risk factors for UK footballers and their increased risks of dementia, according to the FIELD study.

For goalkeepers, the risk of neurodegenerative disease was similar to the general population. But for outfield players, the chance of developing the disease was almost four times higher and among defenders, that jumped to a five-fold increase in risk.

The University of Glasgow’s Professor Willie Stewart, who led the research, said the sport could no longer ignore the risks posed to players. He suggested sports governing bodies urgently consider whether to remove the practice of heading the ball from non-professional games and to include a health warning on the packaging of football equipment.

“Is heading absolutely necessary for football to continue,” he said. “Is exposure to risk of dementia absolutely required for the game of football? We are at the point that football should be sold with a head warning … This cannot be ignored.”

The FIELD (Footballʼs Influence on Lifelong health and Dementia risk) study assessed the medical records of nearly 8,000 former professional footballers aged 40 and over, born between 1900 and 1976.

Researchers used electronic medical records to compare data on hospitalisation, prescribing for dementia and causes of death in Scottish former professional football players with more than 23,000 members of the public.

Neurodegenerative disease diagnoses rose with increasing career length, ranging from an approximate doubling of risk in those with shorter careers, to around a five-fold increase in those with the longest. Over the follow-up period of the study, 5 percent (386 out of 7,676) of the former players were identified as having neurodegenerative disease, compared with 1.6 percent (366 out of 23,028) in the control group.

However, despite changes in football technology and head injury management over the decades, there is no evidence neurodegenerative disease risk changed over time for the population of footballers included in this study, whose careers spanned from around 1930 to the late 1990s.

Stewart told Independent that while modern, synthetic footballs were lighter, they also travelled faster through the air. So while an older, leather football might be heavier, especially when wet, the implications of heading the ball on brain health were not drastically different, since the impact was predominantly affected by speed.

The findings add to the 2019 FIELD research that found that former professional footballers had a three-and-a-half-fold higher rate of death due to neurodegenerative disease than expected.

Stewart said the care and support offered to current and former footballers after a head injury needed attention. “We need to think about returning players to sport after an injury,” he said. “Most people affected by this are aged 30 to 60. What are we doing to support those who have been exposed to an injury?”

Offering padded helmets to players was not a solution, since “when you put protective headgear on and take away that pain sensation, people are more inclined to put their heads in the wrong place”.

Even small impacts to the head carry a risk, Prof Stewart added: “The evidence is very strong now and this paper confirms that the more you are exposed to the repetitive mild head impacts that don't appear to have any impact, the risk goes up.”

Key Points
Question What is the association of field position, career length, and playing era with risk of neurodegenerative disease in male former professional soccer players?

Findings In this cohort study of 7676 Scottish male former professional soccer players and 23 028 general population control individuals matched by sex, year of birth, and area socioeconomic status, risk of neurodegenerative disease among former soccer players varied by field position and career length but was similar across era of participation.

Meaning In this study, risk of neurodegenerative disease was higher among former professional players with longer careers and among those in non-goalkeeper positions, indicating that factors associated with non-goalkeeper positions should be scrutinised to mitigate risk; meanwhile, strategies to reduce head impact exposure may be advisable to reduce negative outcomes in this population.

Conclusions and Relevance The differences in risk of neurodegenerative disease observed in this cohort study imply increased risk with exposure to factors more often associated with non-goalkeeper positions, with no evidence this association has changed over the era studied. While investigations to confirm specific factors contributing to increased risk of neurodegenerative disease among professional soccer players are required, strategies directed toward reducing head impact exposure may be advisable in the meantime.

UK study into football and brain damage to start in 2018