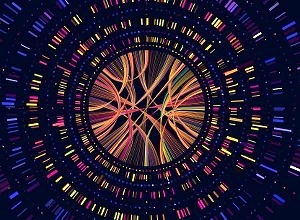 An analysis of data from 1.5 million people has identified 579 locations in the genome associated with a predisposition to behaviours and disorders related to self-regulation, including addiction and child behavioural problems. The international study, published in Nature Neuroscience, is one of the largest genome-wide association studies ever conducted.

With these findings, researchers from leading universities in the United States and the Netherlands have constructed a genetic risk score – a number reflecting a person’s overall genetic propensity based on how many risk variants they carry – that predicts a range of behavioural, medical and social outcomes, including education levels, obesity, opioid use disorder, suicide, HIV infections, criminal convictions and unemployment.

The material below was published by Virginia Commonwealth University in the US on 26 August 2021, and was written by Brian McNeill.

The study “illustrates that genes don’t code for a particular disorder or outcome; there are no genes ‘for’ substance use disorder, or ‘for’ behaviour problems,” said joint senior author Dr Danielle Dick, Distinguished Commonwealth Professor of Psychology and Human and Molecular Genetics at Virginia Commonwealth University.

“Instead, genes influence the way our brains are wired, which can make us more at risk for certain outcomes. In this case, we find that there are genes that broadly influence self-control or impulsivity, and that this predisposition then confers risk for a variety of life outcomes.”

The study, “Multivariate Analysis of 1.5 Million People Identifies Genetic Associations with Traits Related to Self-Regulation and Addiction”, was published on 26 in Nature Neuroscience and was conducted by a consortium of 26 researchers at 17 institutions in the United States and the Netherlands.

“It demonstrates the far-reaching effects of carrying a genetic liability toward lower self-control, impacting many important life outcomes,” said Dick, a professor in the Department of Psychology in the College of Humanities and Sciences and the Department Human and Molecular Genetics in the School of Medicine at Virginia Commonwealth University.

“We hope that a greater understanding of how individual genetic differences contribute to vulnerability can reduce stigma and blame surrounding many of these behaviours, such as behaviour problems in children and substance use disorders.”

The identification of the more than 500 genetic loci is important, the researchers said, because it provides new insight into our understanding of behaviours and disorders related to self-regulation, collectively referred to as “externalising” and that have a shared genetic liability.

“We know that regulating behaviour is a critical component of many important life outcomes – from substance use and behavioural disorders, like ADHD, to medical outcomes ranging from suicide to obesity, to educational outcomes like college completion,” Dick said.

Characterising the genetic contributions to self-regulation can be helpful in myriad ways, she said.

“It allows us to better understand the biology behind why some people are more at risk, which can assist with medication development, and it can allow us to know who is more at risk, so we can put early intervention and prevention programmes in place,” she said. “Identifying genetic risk factors is a critical component of precision medicine, which has the goal of using information about an individual’s genetic and environmental risk factors to deliver more tailored, effective intervention specific to that individual’s risk profile.”

The researchers noted, however, that having a higher risk profile isn’t necessarily a bad thing.

“DNA is not destiny. We all have unique genetic codes, and we’re all at risk for something; but understanding one’s predisposition can be empowering – it can help individuals understand their strengths, and their potential challenges, and act accordingly.”

Published in Nature Neuroscience on 26 August 2021.

Behaviours and disorders related to self-regulation, such as substance use, antisocial behaviour and attention-deficit/hyperactivity disorder, are collectively referred to as externalising and have shared genetic liability. We applied a multivariate approach that leverages genetic correlations among externalising traits for genome-wide association analyses.

By pooling data from ~1.5 million people, our approach is statistically more powerful than single-trait analyses and identifies more than 500 genetic loci. The loci were enriched for genes expressed in the brain and related to nervous system development.

A polygenic score constructed from our results predicts a range of behavioural and medical outcomes that were not part of genome-wide analyses, including traits that until now lacked well-performing polygenic scores, such as opioid use disorder, suicide, HIV infections, criminal convictions and unemployment.

Our findings are consistent with the idea that persistent difficulties in self-regulation can be conceptualised as a neurodevelopmental trait with complex and far-reaching social and health correlates.

Binge drinking changes your DNA, and that matters for treating addiction