Surge in the number of C-sections around the world 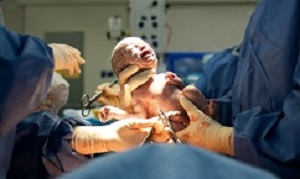 Globally, the number of babies born through caesarean section (C-section) almost doubled between 2000 and 2015 – from 12% to 21% of all births – according to a series of three papers launched at the International Federation of Gynecology and Obstetrics (FIGO) World Congress in Brazil. While the life-saving surgery is still unavailable for many women and children in low-income countries and regions, the procedure is overused in many middle- and high-income settings.

C-section is a life-saving intervention for women and new-borns when complications occur, such as bleeding, foetal distress, hypertensive disease, and babies in abnormal position. But, the surgery is not without risk for mother and child, and is associated with complications in future births.

It is estimated that 10-15% of births medically require a C-section due to complications, suggesting that average C-section use should lie between these levels. However, the Series authors estimate that more than one in four countries in 2015 had lower levels (28%, 47/169 countries), while most countries used C-section above the recommended level (63%, 106/169 countries). In at least 15 countries C-section use exceeds 40% [1].

"Pregnancy and labour are normal processes, which occur safely in most cases. The large increases in C-section use – mostly in richer settings for non-medical purposes – are concerning because of the associated risks for women and children. C-sections can create complications and side effects for mothers and babies, and we call on healthcare professionals, hospitals, funders, women and families to only intervene in this way when it is medically required," says Series lead Dr Marleen Temmerman, Aga Khan University, Kenya and Ghent University, Belgium. "In cases where complications do occur, C-sections save lives, and we must increase accessibility in poorer regions, making C-sections universally available, but we should not overuse them.

However, improvements have been slow across sub-Saharan Africa (around 2% per year), where C-section use has remained low (increasing from 3% to 4.1% of births in West and Central Africa, and from 4.6% to 6.2% in Eastern and Southern Africa).

The authors found that the global increases in C-section use are attributed both to more births taking place in health institutions (about two-thirds of the increase) and to greater frequency of intervention through C-section in health facilities (one-third of the increase).

Looking at trends in Brazil and China where there is high use of C-section, the authors found that most C-sections were in low-risk pregnancies and in women who had previously had a C-section. In Brazil, particularly high levels of C-section use were seen in women who were highly educated, compared with less educated women (54.4% of births vs 19.4%).

The Series is accompanied by a linked comment from Gilberto Magalhães Occhi, the Minister of Health of Brazil which sets out the country's strategies to optimise C-section use.

There were also significant disparities within low- and middle-income countries, where the wealthiest women were six times more likely to have a C-section compared with the poorest women, and where C-section was 1.6 times more common in private facilities than public facilities. The authors suggest that this could be explained by persistent issues with shortages in health facilities and staff in vulnerable and rural populations. In addition, in the UK C-section use has increased from 19.7% of births in 2000 to 26.2% in 2015.

C-section improves maternal, new-born and child survival when complications arise, and can also lower the risk of incontinence and prolapse. However, there are short and long-term risks associated with C-sections for mothers and children, and there are no benefits of C-section in cases without a medical indication. In these instances, women and children can be harmed or die from the procedure, especially when there are not sufficient facilities, skills, and health care available.

Maternal death and disability is higher after C-section than vaginal birth. In particular, C-sections have a more complicated recovery for the mother, and lead to scarring of the womb, which is associated with bleeding, abnormal development of the placenta, ectopic pregnancy, stillbirth and preterm birth in subsequent pregnancies. The authors say that it is important to note that these are small but serious risks, but each of these risks increases as a woman has more C-sections.

There is emerging evidence that babies born via C-section have different hormonal, physical, bacterial and medical exposures during birth, which can subtly alter their health. While the long-term risks of this are not well-researched, the short-term effects include changes in immune development which can increase the risk of allergies and asthma and alter the bacteria in the gut.

"Given the increasing use of C-section, particularly cases that are not medically required, there is a crucial need to understand the health effects on women and children. Greater understanding of this is important to help inform decision making by families, physicians, and policy makers. C-section is a type of major surgery, which carries risks that require careful consideration. The growing use of C-sections for non-medical purposes could be introducing avoidable complications, and we advocate that C-section should only be used when it is medically required." says Professor Jane Sandall, King's College London.

Common reasons why women request C-sections include past negative experiences of vaginal birth, or fear of labour pain or of the effects of labour such as pelvic floor damage, urinary incontinence, reduced quality of sexual functioning. To address this, the authors recommend further research to study relaxation training, childbirth training workshops, educational lectures and brochures, and meeting with health professionals to promote supportive relationships, collaboration and respect.

For healthcare professionals, improved education, guidelines and communication, and second-opinion policies may also be helpful to address influences such as women's requests, convenience, financial incentives, and fear of litigation. In particular, in some regions C-sections are seen as protective, and physicians are less likely to be sued if complications occur, than during vaginal delivery. The authors warn that in many settings young physicians are becoming experts in C-section, while losing confidence in their abilities to assist in vaginal birth.

Clinical interventions are needed to reduce unnecessary C-sections, but there is a lack of research and investment in this area. Early evidence suggests that offering vaginal breech delivery to carefully selected women, and attempting vaginal birth for women who have previously had C-sections may be helpful in reducing C-section use. In addition, some evidence suggests that reducing the number of interventions involved in pregnancy may help reduce C-section use, and this could be achieved by midwifery-led care, planning labour in birth centres, or offering continuous labour support.

"Although there is almost universal consensus that C-section use has increased beyond the reasonable level of need in many countries, effective interventions to optimise use have proven elusive. Interventions should recognise previous birth experiences, consider the health effects of C-section, and provide emotional support. Interventions should provide a sense of empowerment for women, and will require meaningful conversations with health professionals, policymakers and advocacy groups to influence the discussion around maternity care." says Dr Ana Pilar Betran, World Health Organisation.

Also published is a new position paper of FIGO: How to stop the Caesarean section epidemic. This linked comment proposes six recommendations to reduce unnecessary C-sections, including informing women of the benefits and risks of C-sections, matching costs for C-section and vaginal birth in private and public hospitals, and ensuring hospitals publish their annual C-section rates. Emeritus Professor Gerard Visser, University Medical Centre, the Netherlands, and chair of FIGO's Committee Safe Motherhood and New-born Health writes: "Worldwide there is an alarming increase in caesarean section (CS) rates. The medical profession on its own cannot reverse this trend. Joint actions with governmental bodies, the health care insurance industry, and women's groups are urgently needed to stop unnecessary CSs and enable women and families to be confident of receiving the most appropriate obstetric care for their individual circumstances."

An editorial published alongside the Series says: "What is left unresolved are the tensions generated when women's agency in choosing a caesarean section go against medical directives to intervene against them. Although the Lancet Series says that women's demand is not a substantial driver of the current problem of overuse, efforts to reduce caesareans must, nevertheless, strongly respect women's rights to choose the circumstances of birth. NICE guidance in the UK, for example, states that a woman should be offered a planned caesarean section if she so wishes. But it also says that practitioners can decline to provide one, and the new WHO guidance urges avoidance when caesarean is not indicated. What then? With this new Series we hope to spark more debate and research about implementing recommendations to reduce caesarean section use."

Sandall says in a BBC News report that reasons surgery is carried out unnecessarily vary from country to country and that with poorer nations, choices are extremely limited. "Globally, drivers for the increasing rates vary between countries and include a lack of midwives to prevent and detect problems, loss of medical skills to confidently and competently attend a (potentially difficult) vaginal delivery, as well as medico-legal issues." She adds that financial incentives exist for both doctor and hospital with the certainty of planned day-time deliveries, especially in private practices.

The report says in some cases the trend is system-driven. In Brazil, for example, the free public healthcare system is of poorer quality and pregnant mothers who can't afford private healthcare might be offered the procedure to help clear patients more quickly through the system." "In China, a shortage of midwives can result in a lack of screening, meaning not only that necessary medical checks are not being carried out, but that there is a lack of expert help with assisting childbirth."

Variation exists within countries between the urban wealthy giving birth in private facilities where there are high rates of Caesarean section and the rural poor without access to the procedure, Sandall says.

"The issue for women is how do you plan?" Sandall says. "Conjecture that blames mothers for the high Caesarean section rate, either because of their poor health – obesity, hypertension – or because they are demanding medically unnecessary Caesarean sections due to fear or disinterest in labour ignores the wider systems issues that drive the growing reliance on caesarean sections. Pregnant mothers must have access to professional and informed advice in order to make a decision."

She adds that the focus must now be on providing more frontline staff at facilities in countries where the issue is of greatest concern. "We need to start working with insurance companies in these countries to help with the provision of services and staff, as well as dealing with local and national governments to invest in healthcare."

According to the report, campaigners say some women who request an elective Caesarean sometimes "meet judgmental attitudes". They argue that some expectant mothers who ask for the procedure may be survivors of sexual abuse, or suffer from poor physical or mental health.