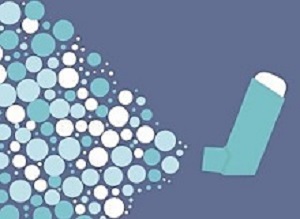 Patients with severe asthma which is not controlled with standard treatment – leaving them at risk of severe asthma attacks – could benefit from using a single inhaler combining three, instead of two therapies, according to two phase 3 randomised controlled trials with over 2,500 patients across 17 countries, presented at the European Respiratory Society (ERS) Conference 2019.

Using multiple inhalers leaves patients trying to prevent symptoms using devices of different design, with different instructions, and with different dosing regimens (such as the number of inhalations per day). This can reduce patients' ability to use them regularly as prescribed, so a single inhaler that combines therapies could help ensure effective treatment delivery and improve treatment adherence.

A previous trial of the three medicines in two separate inhalers indicated that they significantly improved lung function and reduced asthma attacks and symptoms in patients with a more severe form of asthma. The new trial looks at combining the three therapies into one inhaler for the first time, and is trialled in a broader patient group of those with less severe asthma.

A two-in-one inhaler combines a steroid preventer and long-acting bronchodilator such as a long-acting beta2 agonist, but some patients continue to experience asthma attacks, including shortness of breath, wheezing, coughs and chest tightness. They require the addition of a third medicine, and these new studies investigate the effects of adding it to a two-in-one combination inhaler. The new triple-therapy inhaler included a steroid preventer (which controls inflammation), a long-acting bronchodilator (which keeps the airways open) and a muscarinic antagonist called glycopyrronium (which increases airflow).

"The patients in our studies had been using preventer inhalers combining two medicines but they weren't working as effectively as they do for most asthma sufferers. The effects of triple therapy might seem moderate when you look at the numbers involved, but even incremental improvements can be valuable when there are few treatment options left available," says Professor J Christian Virchow from the Rostock University Medical Centre in Germany.

The outcomes measured were lung function and whether patients still experienced moderate and more severe asthma attacks. To test lung function, or the degree to which patients' airways were obstructed, patients exhaled as much air as they could in a second and a measure was taken of the volume in millilitres, known as the forced expiratory volume (FEV1). Patients in both studies were able to exhale significantly more air when receiving triple therapy after 26 weeks of treatment, compared to double therapy: 57mL more in the TRIMARAN group (change from baseline in pre-dose FEV1: 185 mL up from 127 mL) and 73mL more in the TRIGGER group (229 mL up from 157 mL).

Triple therapy was found to be better at preventing moderate to severe asthma attacks than standard combined therapy with two medicines. In the TRIMARAN group, moderate and severe attacks were reduced by 15% (from an average of 2.16 exacerbations per patient per year to 1.83), while in the TRIGGER trial there was no statistically significant difference.

"Since the preventive treatment we trialled delivers three drugs via one inhaler, and given the reduction we saw in the annual rate of severe asthma attacks, we expect it will provide an attractive option helping to fulfil an unmet need for both individuals and health systems," says co-author Sandrine Corre from Chiesi Farmaceutici in Italy.

The authors note that asthma symptoms were better controlled in all patients during the trial, including those taking the inhaler combining two medicines. They attribute this to people being better at sticking to prescribed medicines or take better care of their health while taking part in a trial. They also note that in the TRIGGER group, there was no significant difference between those on single inhaler triple therapy and those in the additional control group receiving triple therapy via two inhalers.

Writing in a linked comment, Dr Mark Fitzgerald from the University of British Columbia, Canada, says: "This new treatment option is to be welcomed because it provides in one inhaler a simpler treatment option for patients with asthma that is uncontrolled on a combination inhaler with a long acting protagonist and inhaled corticosteroids. We must continue to emphasise the importance of asthma education and inhaler technique and adherence for all patients with asthma. We need to continue to improve characterisation of the heterogeneous nature of airway diseases and in parallel employ targeted treatments for the right patient at the appropriate time."