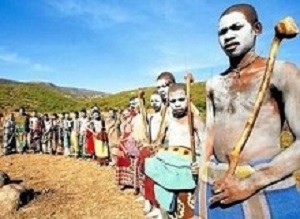 Chair Chief Mwelo Nonkonyana blamed the deaths on negligence by traditional surgeons and nurses as well as people who are illegally financially benefiting from the initiation process. "The House of Traditional Leaders is saddened by the deaths of initiates. We express anger, disgust and disappointed by the deaths. The deaths happened after we and government launched the extensive summer season initiation campaign."

Nonkonyana said together with government they embarked on an awareness campaign with various stakeholders including parents to educate people about the initiation tradition and laws. "We told them that our customs must be respected, and we will not tolerate any injury or death to an initiate. What is sad is that parents were aware about our campaign. Right at the end of examinations, we then found out about the death of an initiate. His death caught us unaware. We then embarked on an aggressive campaign to curb the demise from escalating."

Nonkonyane said they have established that many deaths were caused by dehydration as initiates were deprived of water; a basic human right.

According to the report, they have involved the police to arrest anyone involved in the deaths. "We found out that some circumcision lodges were not fit to accommodate human beings. The lodges were covered with plastic materials. Some initiates suffocated to death in those lodges. Again, in those lodges, traditional nurses left initiates on their own.

"In one instance in Mdantsane, an initiate died at the hands of a traditional nurse during a ceremony. The boy was on dialysis, he was expected to visit the hospital twice a week and his parents were aware of that but denied him to go to hospital," he said.

The House is calling on those found irresponsible during the initiation period to face murder charges and the National Prosecuting Authority (NPA) to successfully prosecute them.

"In Port Elizabeth, the death of an initiate was due to negligence. The boy died a day before coming home. He was given food a day before he could go home. We suspect that he was poisoned.

"In Maluti one initiate allegedly hanged himself and that is also negligence. We want government to declare the deaths as a disaster and be allocated additional funds to arrest the situation. We have agreed with Minister Zweli Mkhize during his visit that we need to close all loopholes," he said.

In June the province lost 17 initiates.