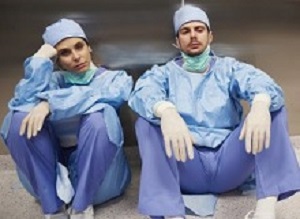 A UK study suggested that the "weekend effect" of increased hospital mortality was driven by junior doctors admitting a lower proportion of relatively healthy patients at the weekend compared with the weekday, thus diluting the risk pool of weekday admissions.

The “weekend effect” of increased hospital mortality has been well documented, including a 2015 study linking this to 11,000 extra UK deaths annually, which led to controversial contract changes for junior doctors as the UK government sought a "seven-day" National Health Service. But the underlying causes have been poorly understood: are hospitals really less safe on weekends or do other factors lead to a comparison-skewing weekday reduction of the risk of mortality?

A study led by University of Cambridge researchers, based on nearly 425,000 emergency department attendances over seven years at Addenbrooke's Hospital in Cambridge, confirms the weekend effect. This appears to be because junior doctors are more likely to admit patients with lower mortality risk during the week.

The research found that junior doctors (qualified doctors still in training) based in the emergency department admitted less-sick patients at half the rate at weekends compared to weekdays, diluting the risk pool of weekday mortality and contributing to the weekend effect. In contrast, the admitting patterns of senior doctors was the same on weekends and weekdays, and the data did not provide evidence of a weekend effect among patients admitted by senior doctors.

"There has been previous research on how physician-level factors influence patient care, but our study instead focuses specifically on how seniority affects admitting patterns and in turn how this relates to the weekend effect," said co-author Stefan Scholtes, Dennis Gillings professor of health management at Cambridge Judge Business School. "It's clear that the admitting patterns of junior doctors changes at the weekend."

In a commentary about the study, the president of the Royal College of Emergency Medicine, Dr Katherine Henderson, said the study had "given us a lot to think about" — describing as "surprising" the finding that junior doctors admitted more relatively well patients on weekdays.

"The NHS needs to use its resources as effectively as possible," she wrote. "We should only admit patients who need to be admitted. This paper suggests it would be a good idea to make sure we are using our senior decision makers where they can be most valuable – seeing sick patients and actively evaluating all borderline admission/discharge decisions."

Abstract
Objective: Admission to hospital over a weekend is associated with increased mortality, but the underlying causes of the weekend effect are poorly understood. We explore to what extent differences in emergency department (ED) admission and discharge processes, severity of illness and the seniority of the treating physician explain the weekend effect.
Methods: We analysed linked ED attendances to hospital admissions to Cambridge University Hospital over a 7-year period from 1 January 2007 to 31 December 2013, with 30-day in-hospital death as the primary outcome and discharge as a competing risk. The primary exposure was day of the week of arrival. Subdistribution hazards models controlled for multiple confounders, including physician seniority, calendar year, mode of arrival, triage category, referral from general practice, sex, arrival time, prior attendances and admissions, diagnosis group and age.
Results: 229 401 patients made 424 845 ED attendances, of which 158 396 (37.3%) were admitted to the hospital. The case-mix of admitted patients was more ill at weekends: 2530 (6.4%) admitted at a weekend required immediate resuscitation compared with 6450 (5.4%) admitted on a weekday (p<0.0001). Senior doctors admitted 24.8% of patients on weekdays and 24.0% at weekends, but junior doctors admitted 61.7% of patients on weekdays and 44.2% at weekends. 3947 (3.3%) patients admitted on a weekday and 1454 (3.7%) patients admitted at a weekend died within 30 days. In the adjusted subdistribution hazards model, the HR of in-hospital death was 1.11 (95% CI 1.04 to 1.18) for weekend arrivals. After controlling for confounders, the in-hospital mortality of patients admitted by junior doctors was greater at the weekend (adjusted HR (aHR) 1.15, 95% CI 1.06 to 1.24). In-hospital mortality for patients admitted by senior doctors was not statistically different at the weekend (aHR 1.08, 95% CI 0.98 to 1.19).
Conclusions: Our findings suggest that the weekend effect was driven by a higher proportion of admitted patients requiring immediate resuscitation at the weekend. Junior doctors admitted a lower proportion of relatively healthy patients at the weekend compared with the weekday, thus diluting the risk pool of weekday admissions and contributing to the weekend effect. Senior doctors’ admitting behaviour did not change at the weekend, and the corresponding weekend effect was reduced.